Chilly and cold last night. This morning there was a light frost on the ground in St Barnard’s Parish SP. Yikes! Must be way cold every where else!

Drove into New Orleans yesterday, our first time. Driving around and through St Barnard’s Parish we were exposed to lots of lingering desolation and destruction from Katrina. We passed through the 9th ward on the way into the city and the sense of desolation and destruction only got worse. Bright colors help but they don’t really change whats underneath. The snippets and sound bites that sounded like promises from politicians end up looking like lies five years out.

When we got into the city we spent our time on the River Walk, in and around Jackson Square, and on the side streets of the French Quarter. I was prepared for seedy but it did not feel seedy at all to me. The soul of this city is still there. We felt like we were in a European city, Quebec City up north maybe. Very distinctive place. I am not sure it can or will last unless the relationship with the Mississippi River and sea level is figured out. 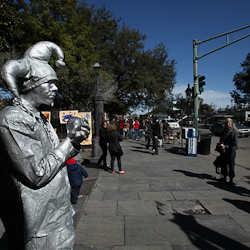 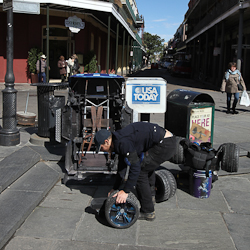 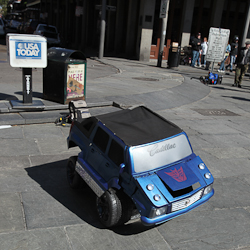 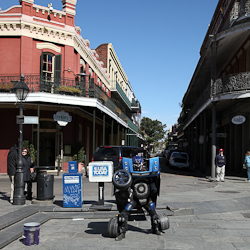 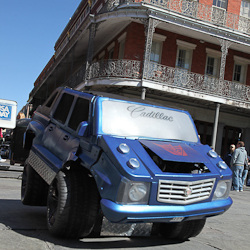 I truly enjoy street people and street entertainment but  I do not enjoy being separated from my hard earned money, especially if I feel had or taken.  Lots of street people, street entertainment in NOLA. I wasn’t suitably prepared mentally or behaviorally. Right off the bat I was separated from some of my cash by a horn player of no particular reknown or skill other than to  make me feel cheap. This left me feeling pissed off and uncomfortable. Later, but not enough later, a young guy who was obviously trying to hone his presentation, hit us, me up for a NOLA shoe shine based upon his ability to guess correctly where I got my shoes (I got my shoes on my feet). This I felt some better about but I was still feeling taken by the city of NOLA. So I got change for a twenty, mostly ones and decided I would take part in the scene but get out in front and support the acts and presentations I enjoyed as opposed to being and feeling fleeced.

We ran into a ‘car guy’ from up north Circus Smirkus in Vermont,  a silver statue who very politely and sincerely thanked me for my offering, a gravel voiced black man serenading the crowd outside the church on Jackson Square. Those I felt good about. 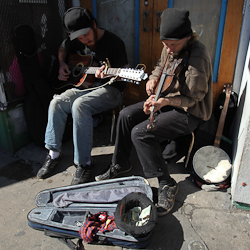 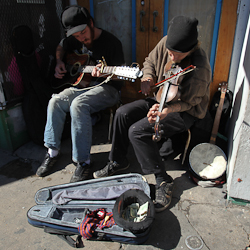