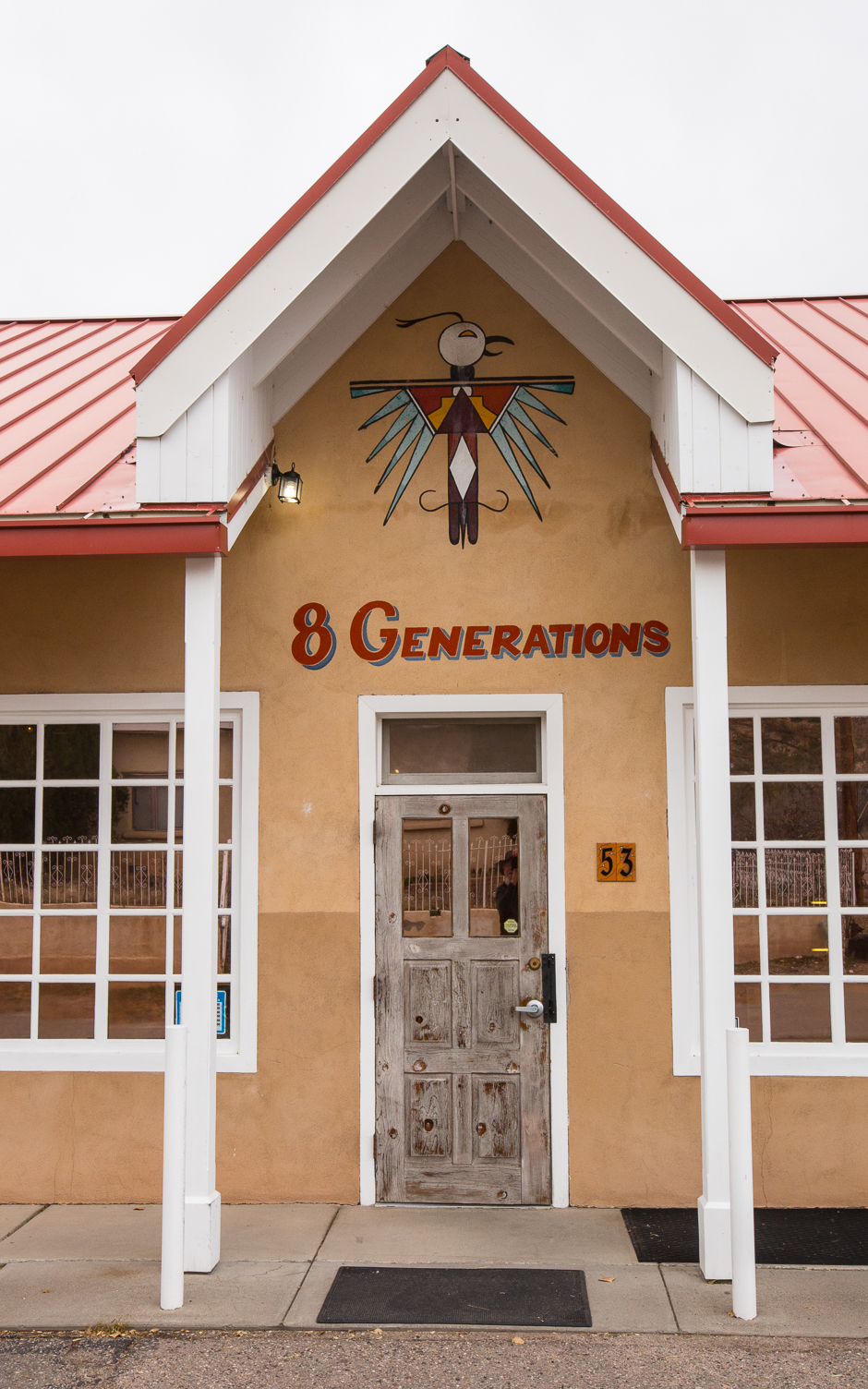 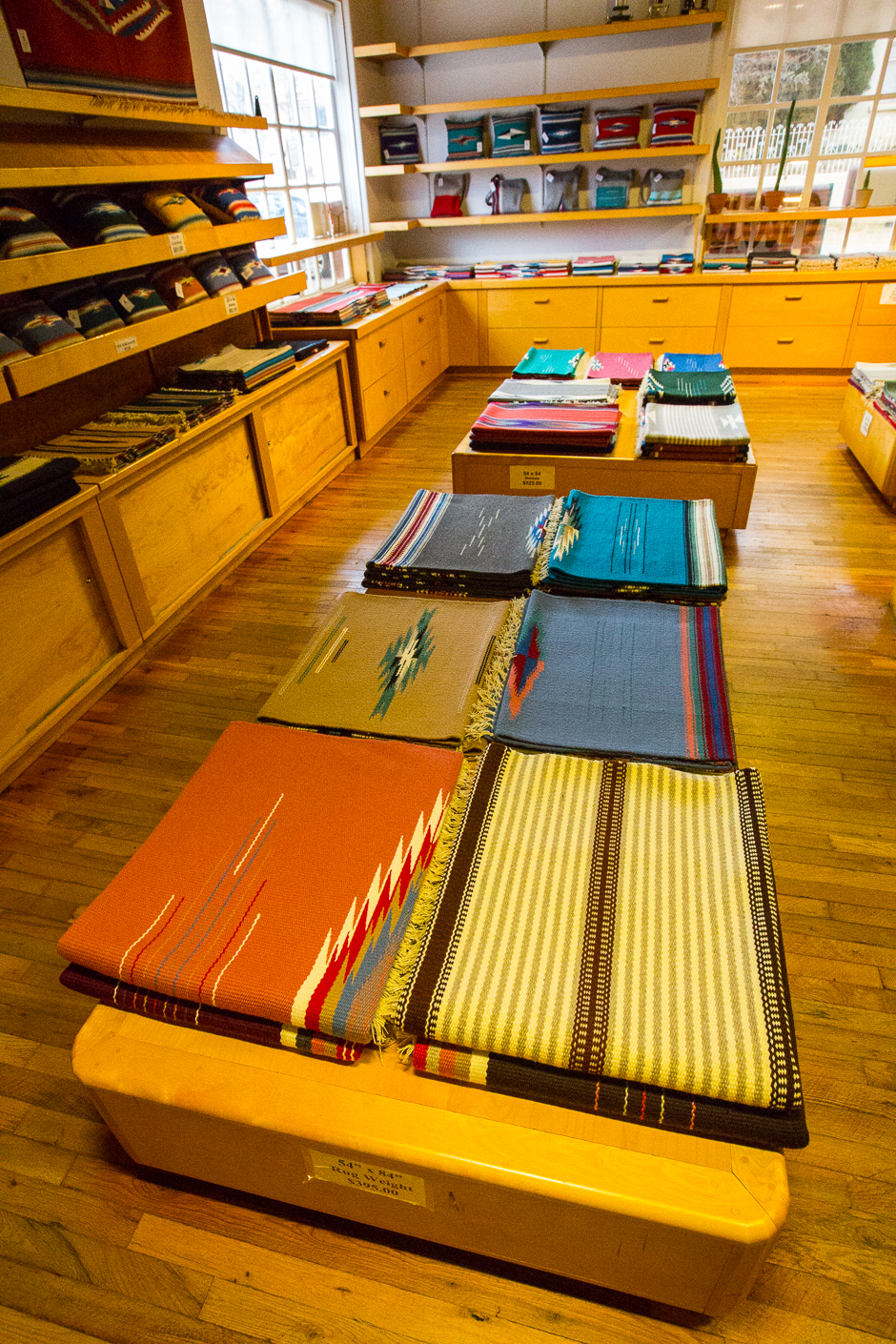 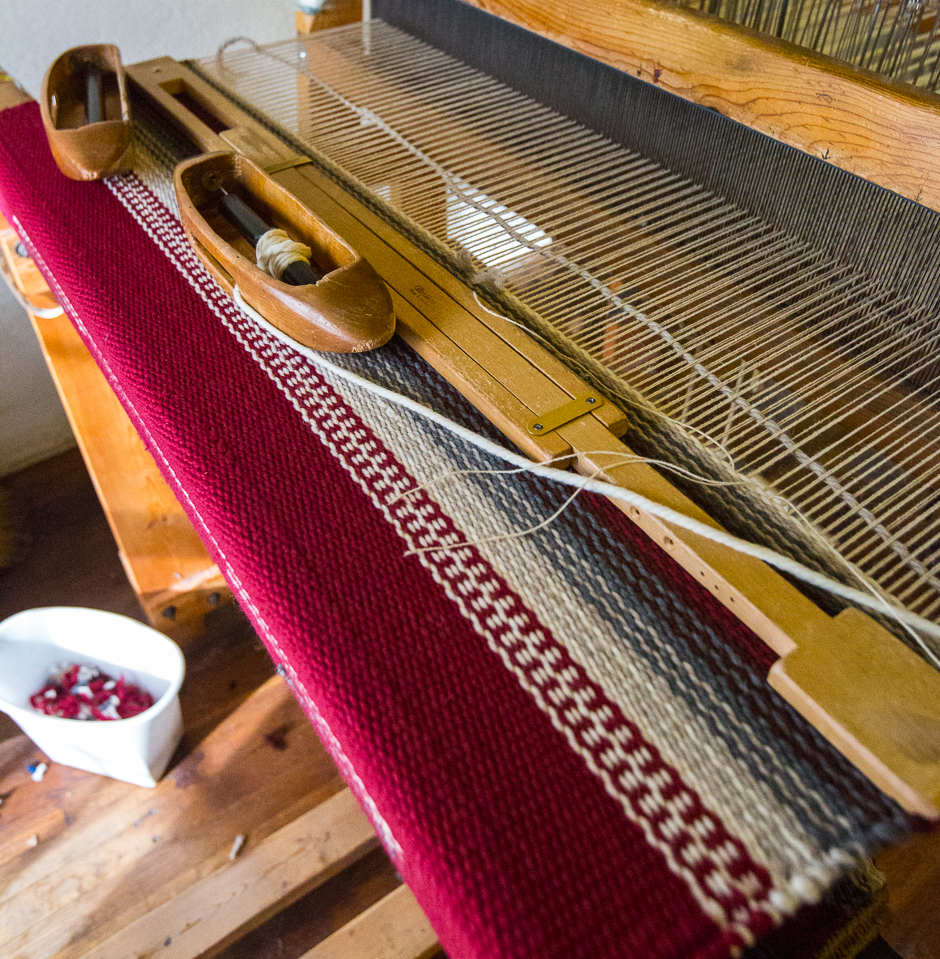 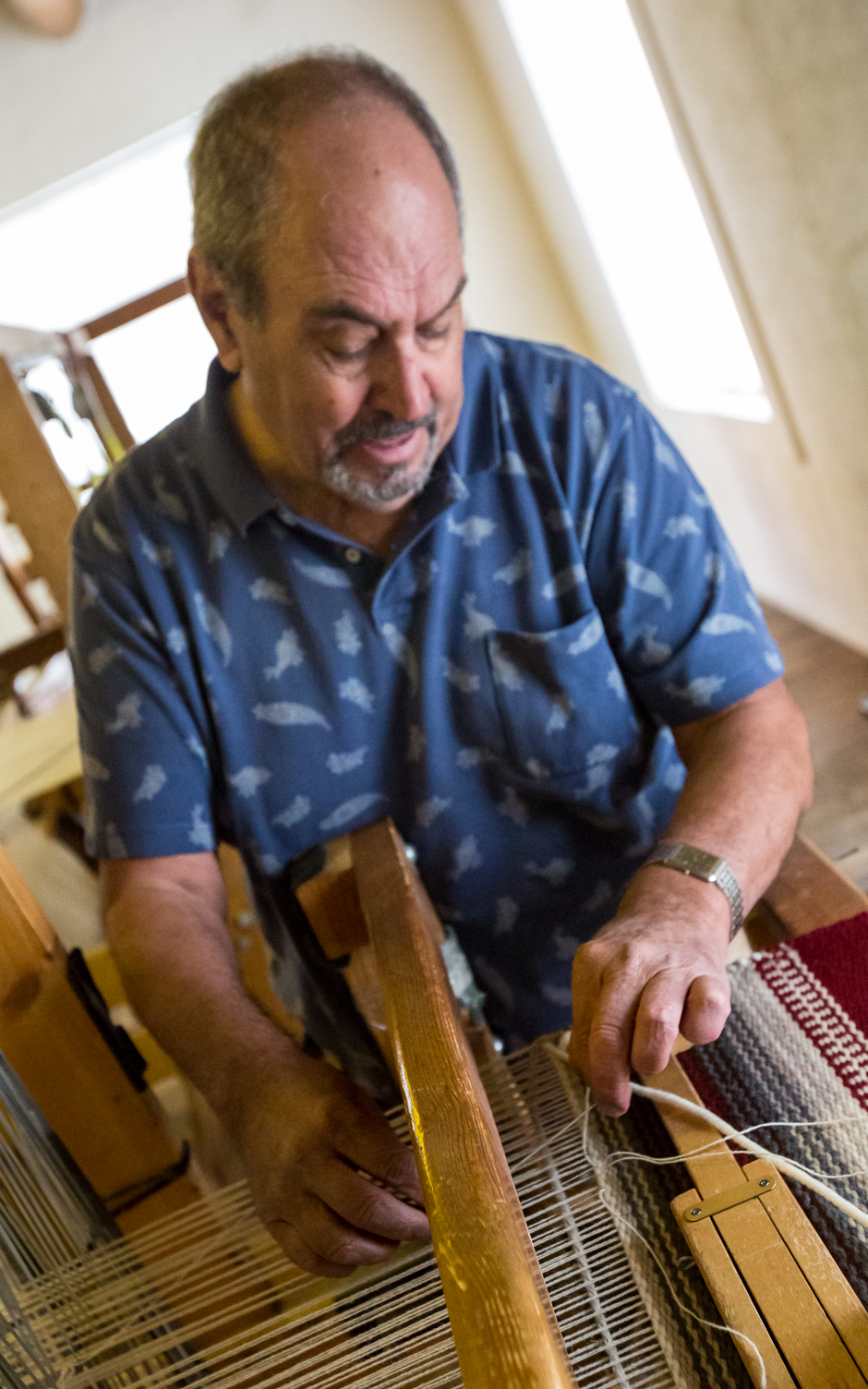 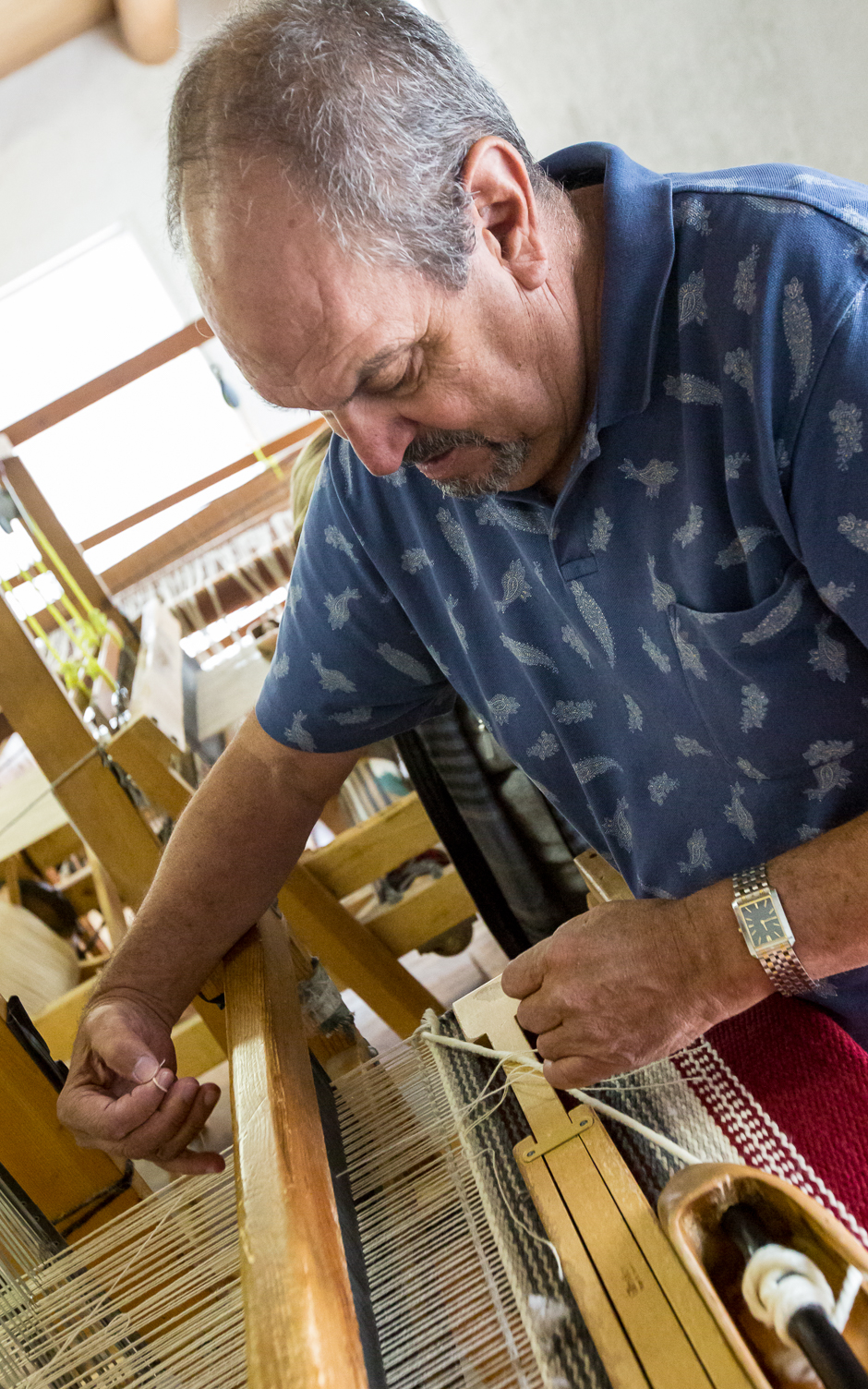 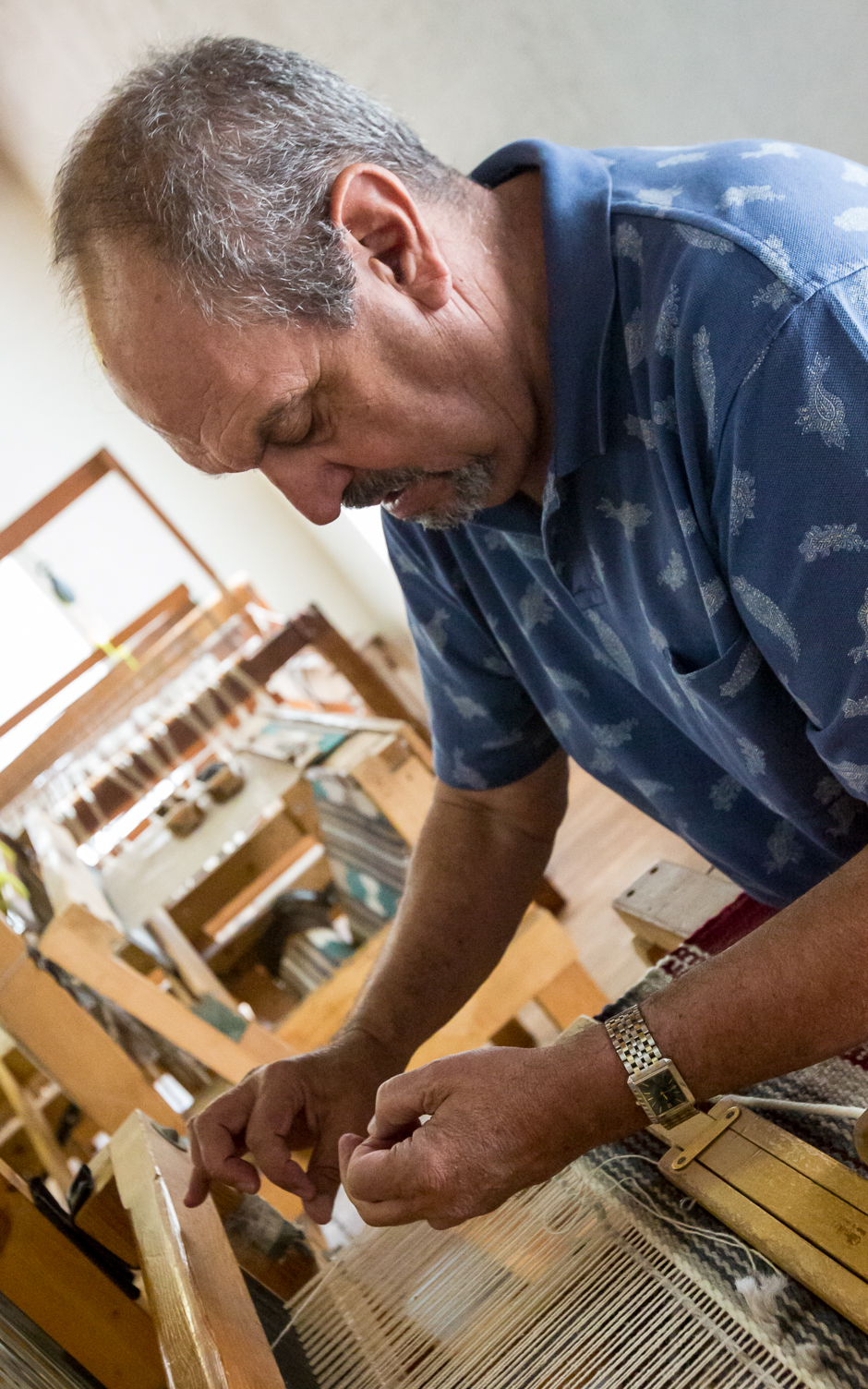 Alan Ortega spoke with pride of a ninth generation of Oretga weavers, one of them being a 26 year old grand-daughter. 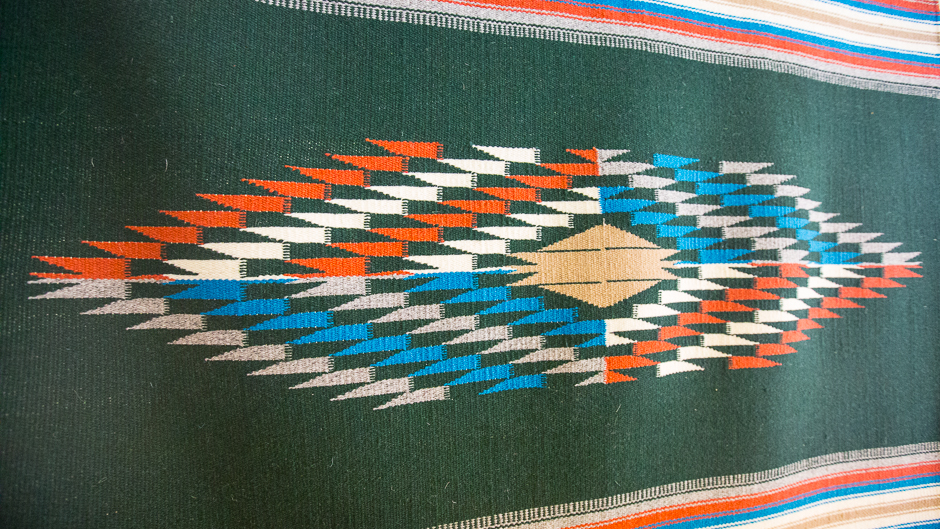 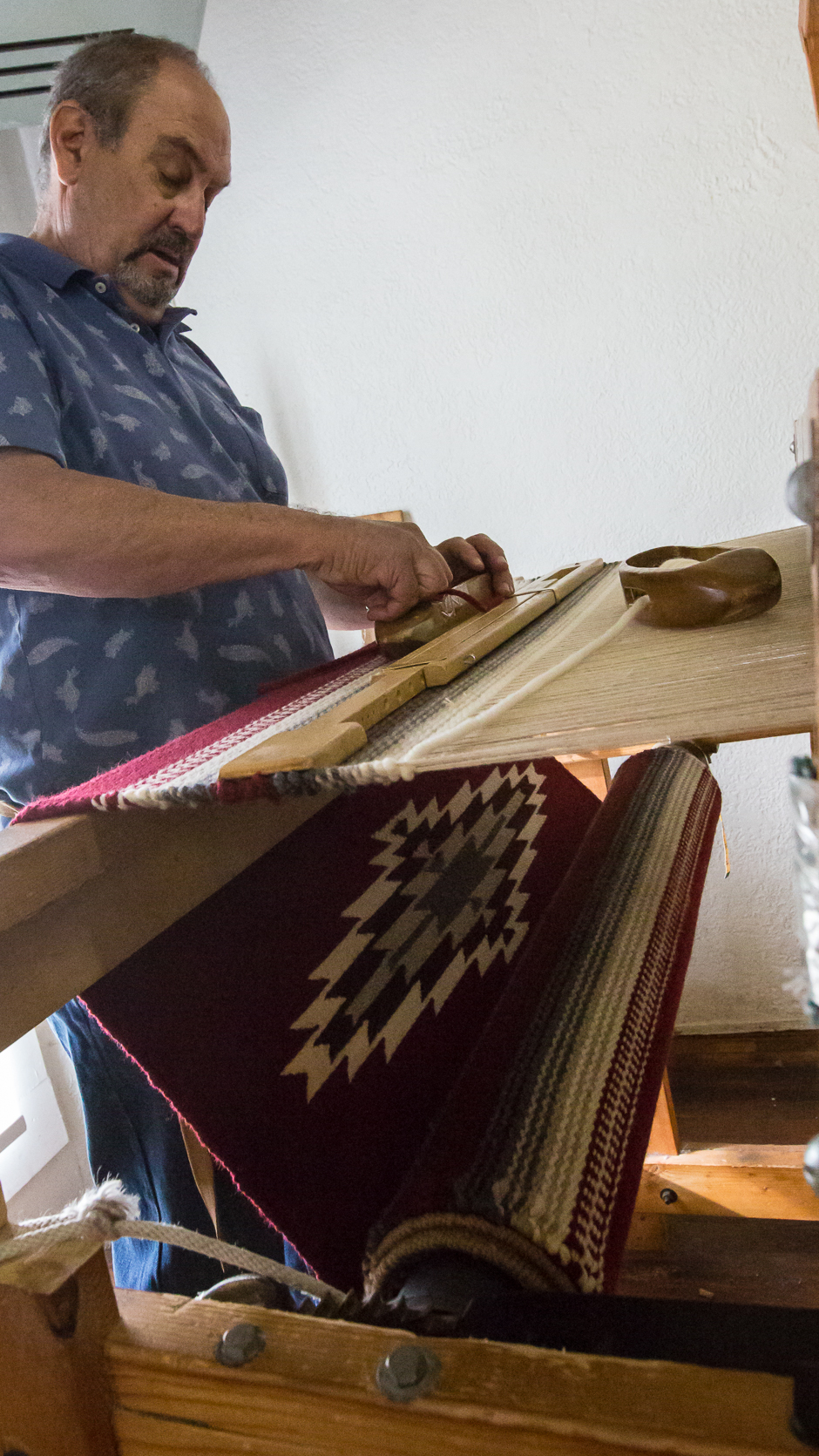 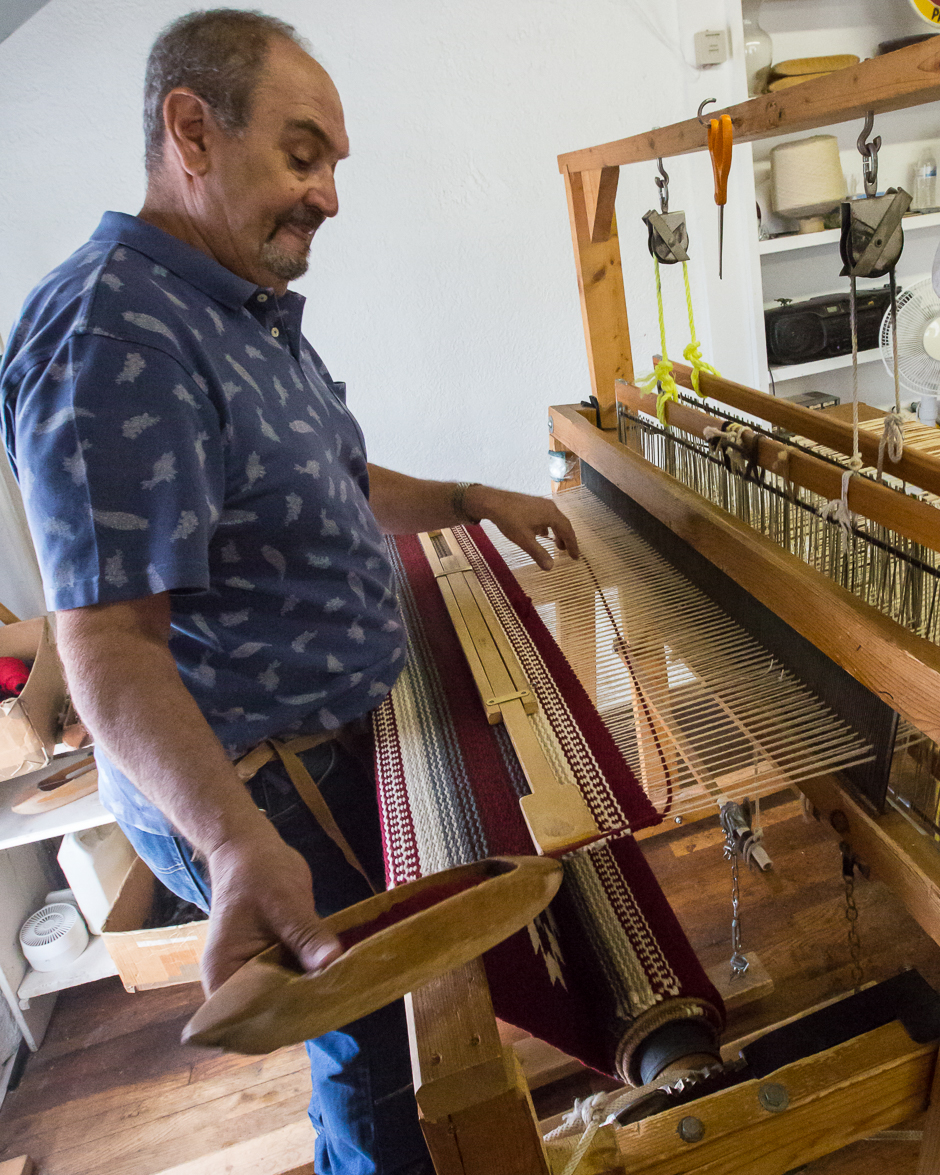 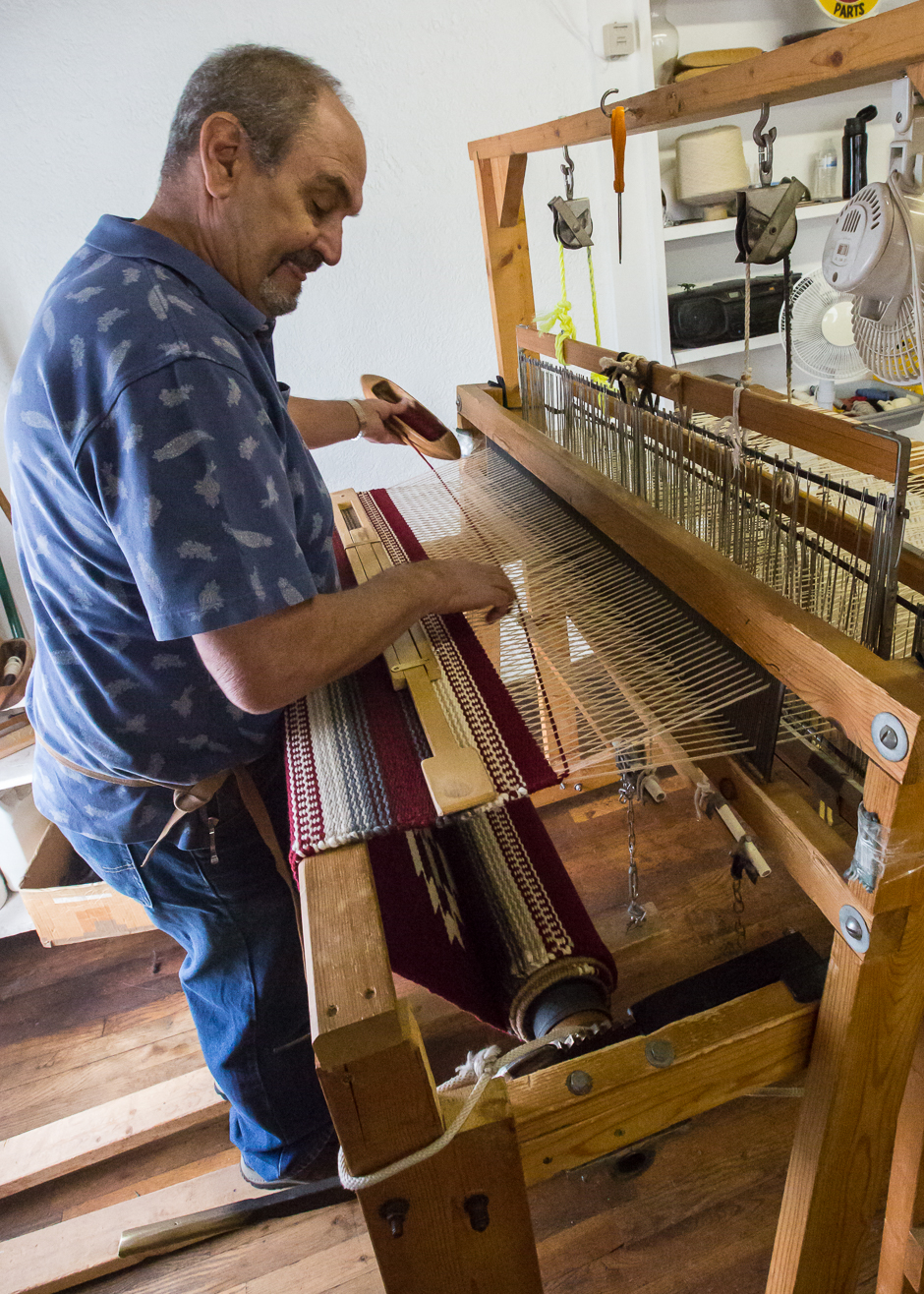 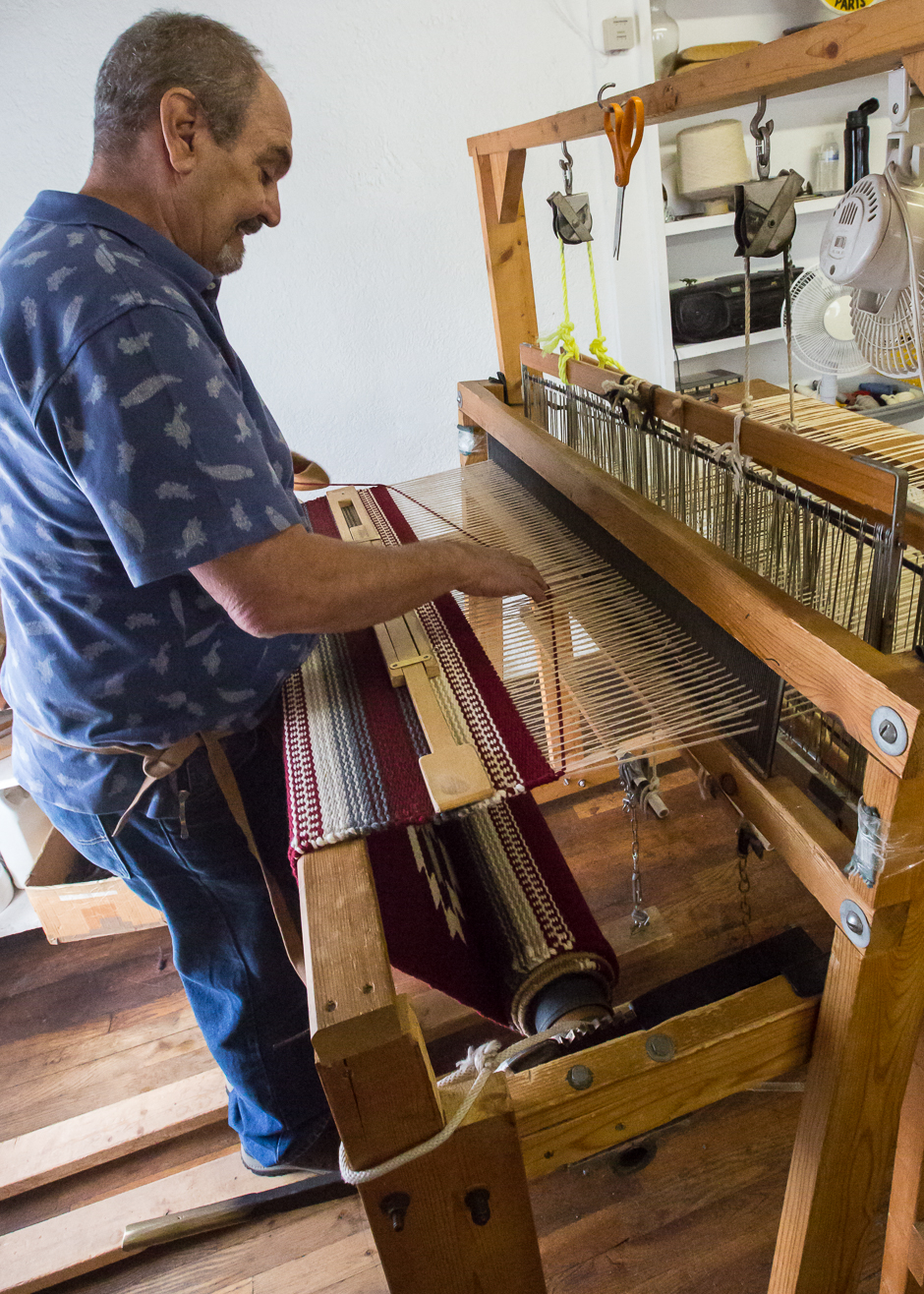 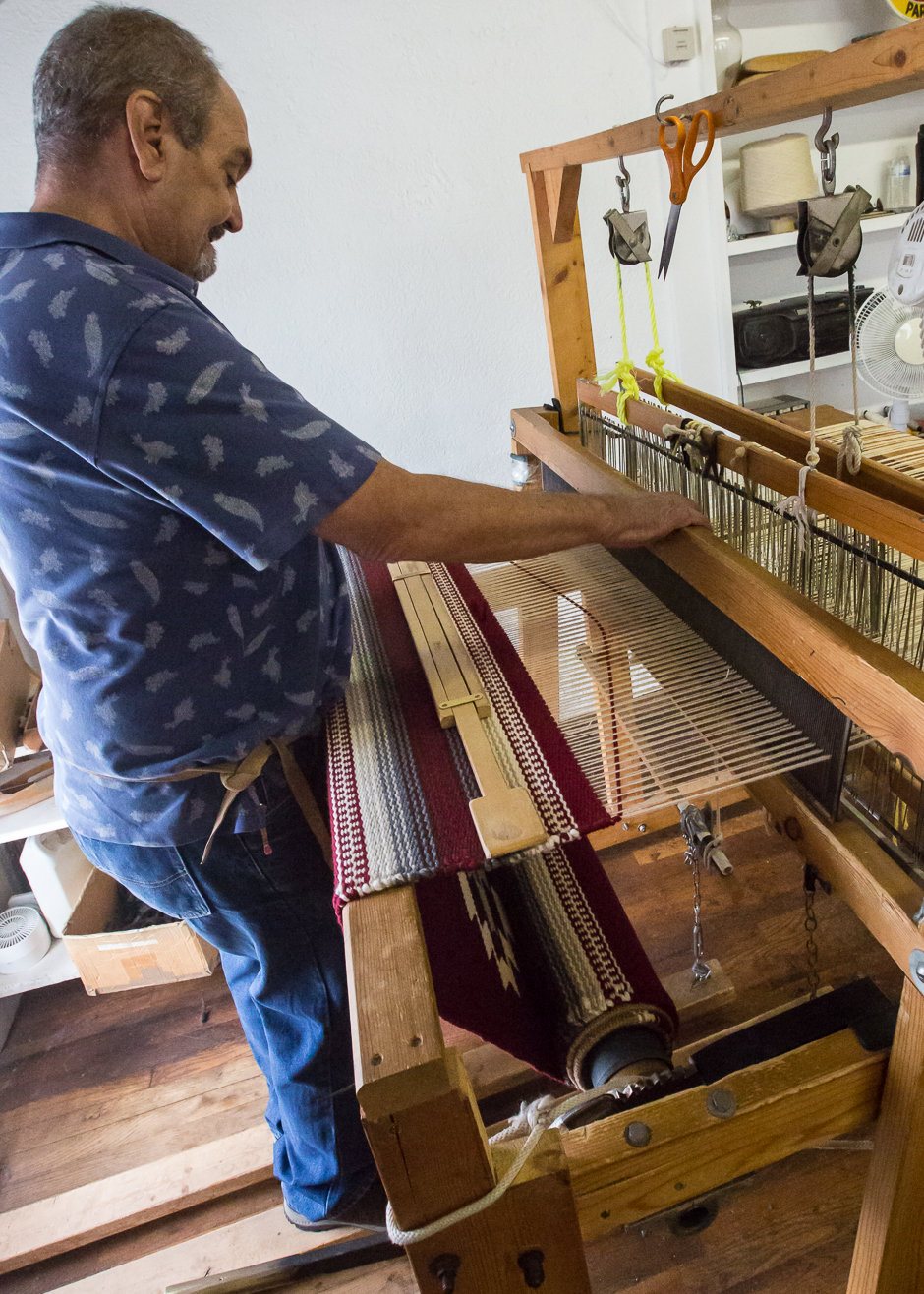 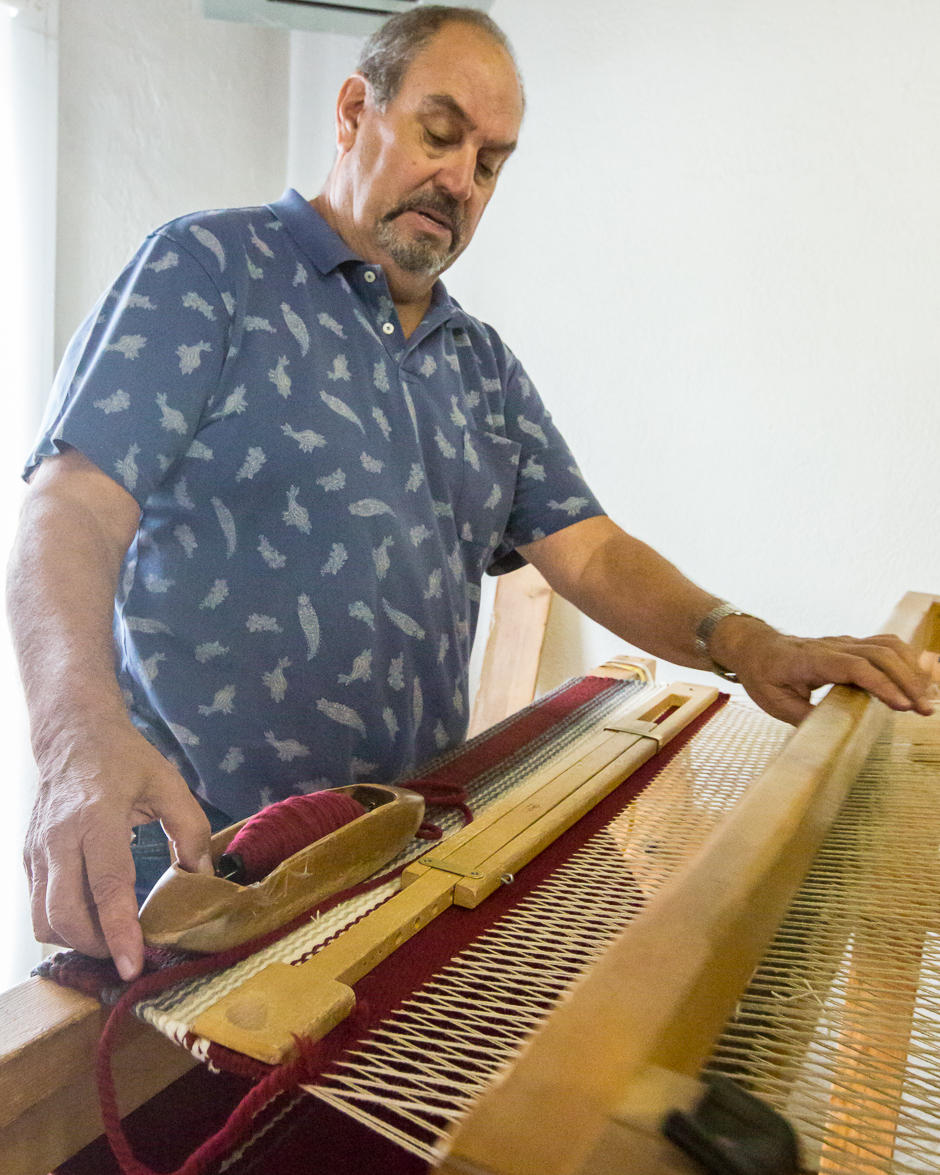 In the early 1700’s, a young man named Gabriel Ortega was among a group of settlers who came to the Northern Rio Grande Valley to settle in what is now Chimayo, New Mexico. In those days Chimayo and the surrounding area were the last frontier of New Spain. Life was difficult which meant Gabriel Ortega and his contemporaries were self-sufficient people. One of the skills needed to survive was weaving, with which they made clothes, blankets, rugs and even mattresses.

Life continued much the same for Gabriel and his son Manuel, Manuel’s son Jose Gervacio and Jose Gervacio’s son Ramon.

The Ortega’s wove, farmed and made do with what they had.

In 1885, a few years after Jose Ramon’s son Nicacio was born, the railroad came to nearby Espanola and things soon began to change. The American culture started to mix with the isolated Spanish and Native American cultures of Northern New Mexico. New products such as roofing, canned foods, tools, sewing machines, etc. became available for the first time. In contrast, the newcomers wanted chile rastras, Indian pottery, hand woven Chimayo blankets and other indigenous products. 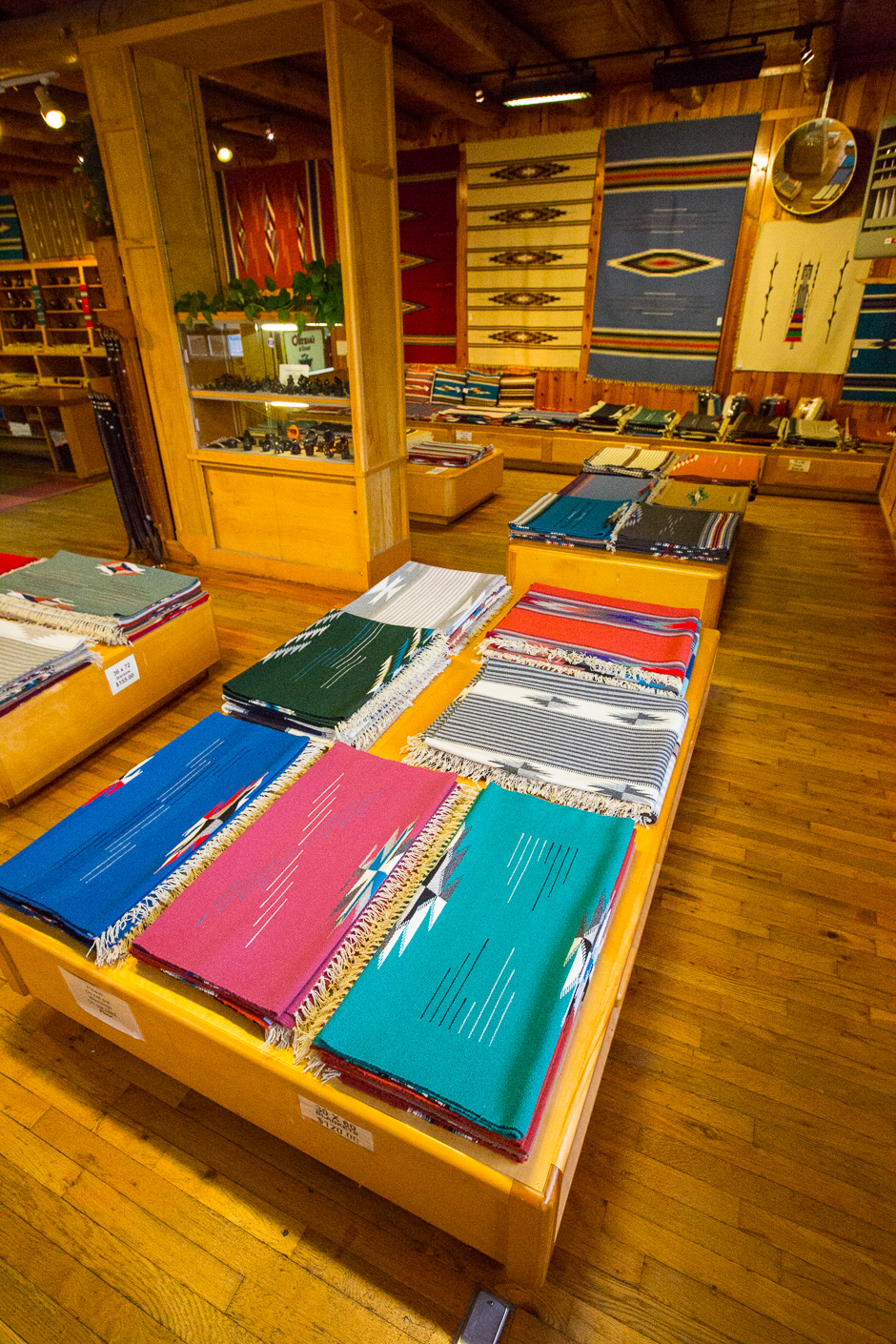 In the early 1900’s, Nicacio and his wife Virginia, who was also from a weaving family, opened a general store in Chimayo. Nicacio had a loom in his store and sold his weavings along with those of his sons, relatives and friends. The demand kept growing as more people discovered Santa Fe and New Mexico. 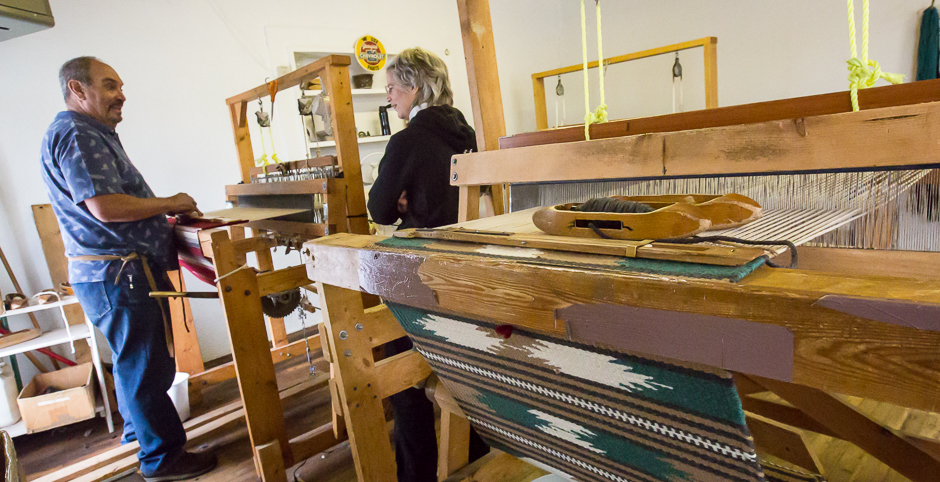 After World War II, Nicacio’s sons, Jose Ramon and David, along with their wives Bernie and Jeanine joined their father’s business. It continued to grow. The Ortega’s hired other families to help keep up with the demand. They started to make coats, vests, purses and other apparel out of their weavings. The general store was a thing of the past and the present day Ortega’s Weaving Shop came into being. 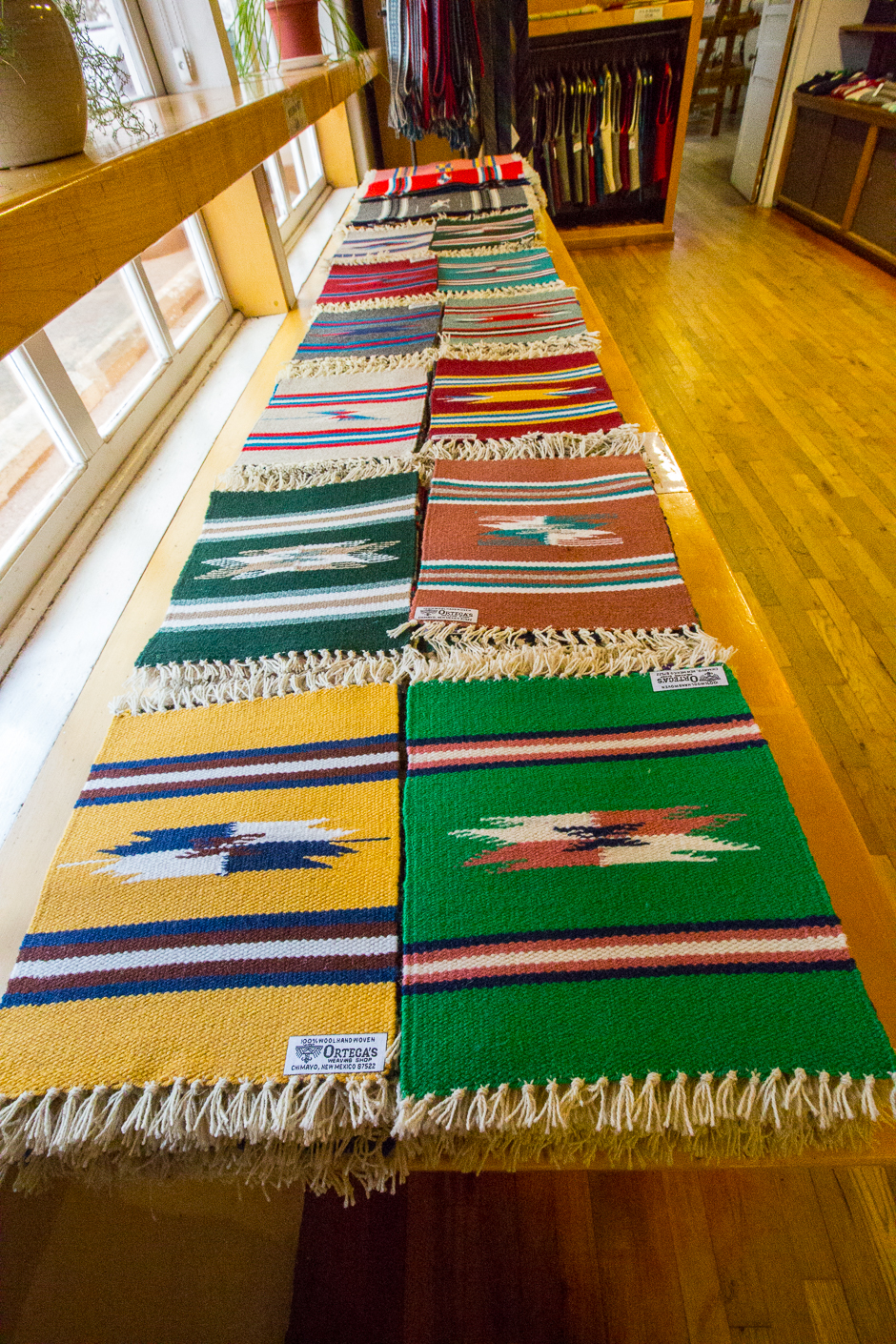 Nicacio passed away in 1964 and Jose Ramon in 1972. David and Jeanine kept up the tradition and in the mid-1970’s were joined by their sons Andrew and Robert. In addition, David’s brother Merardo opened a shop in Old Town Albuquerque to sell the families weavings. 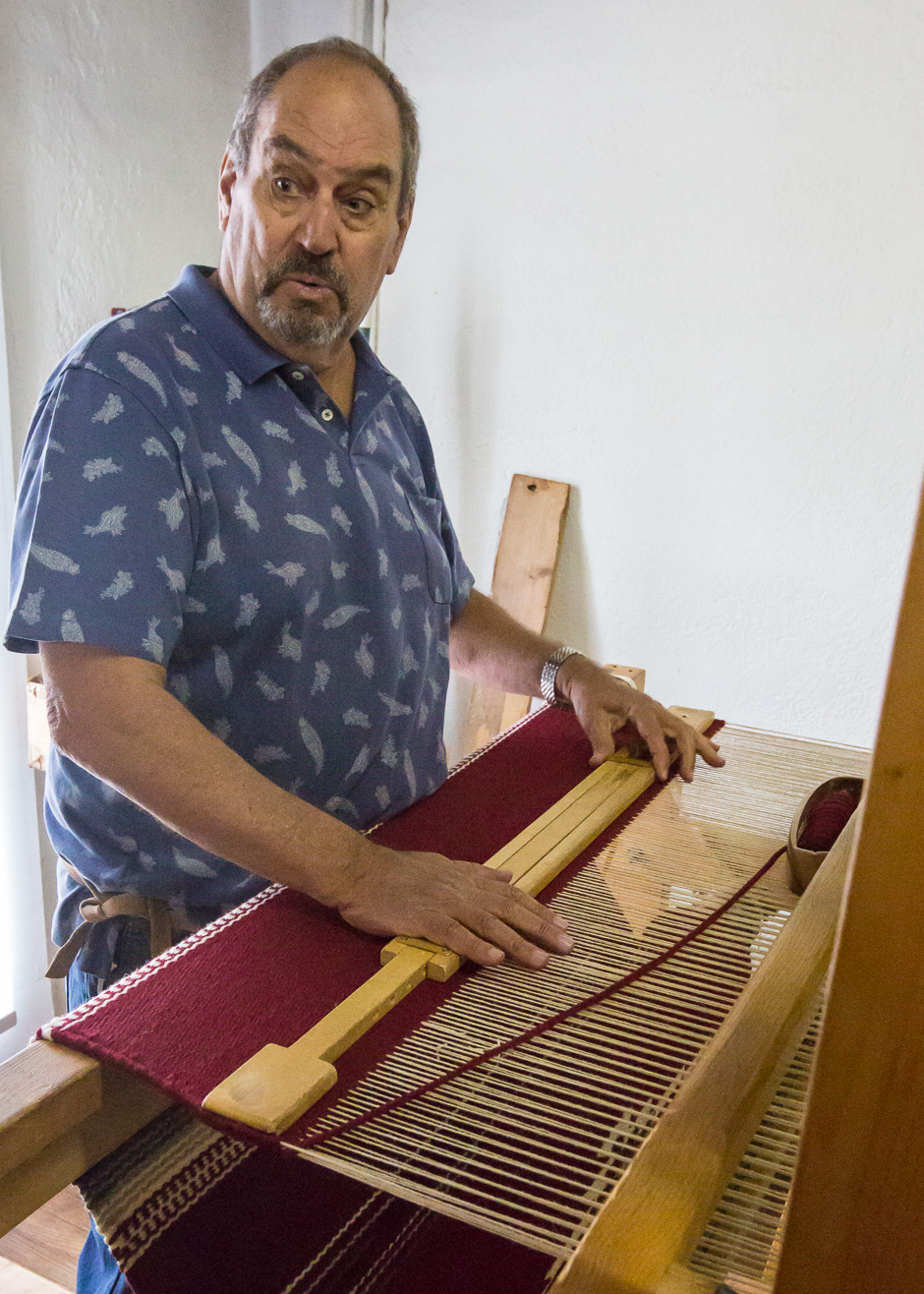 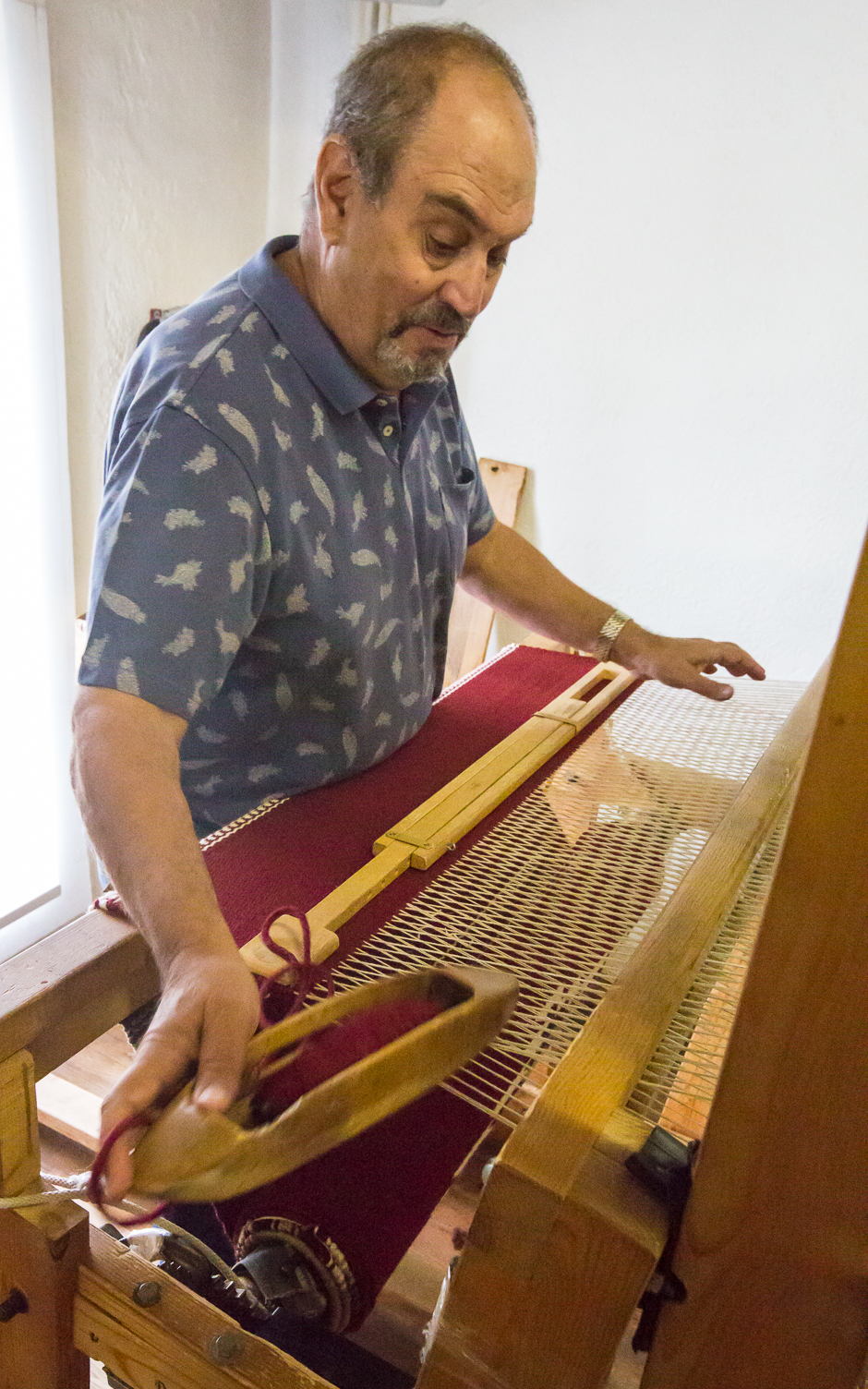 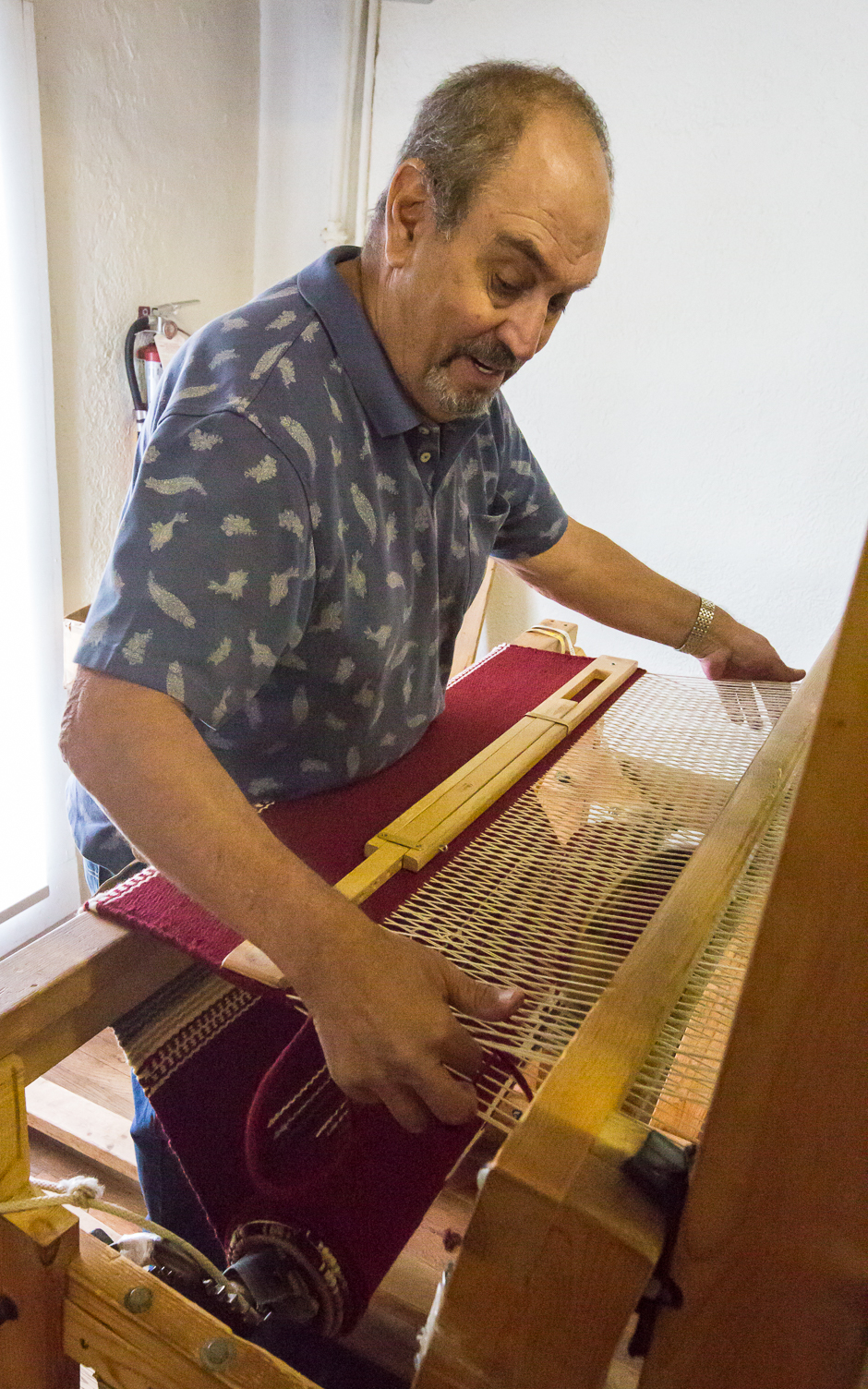 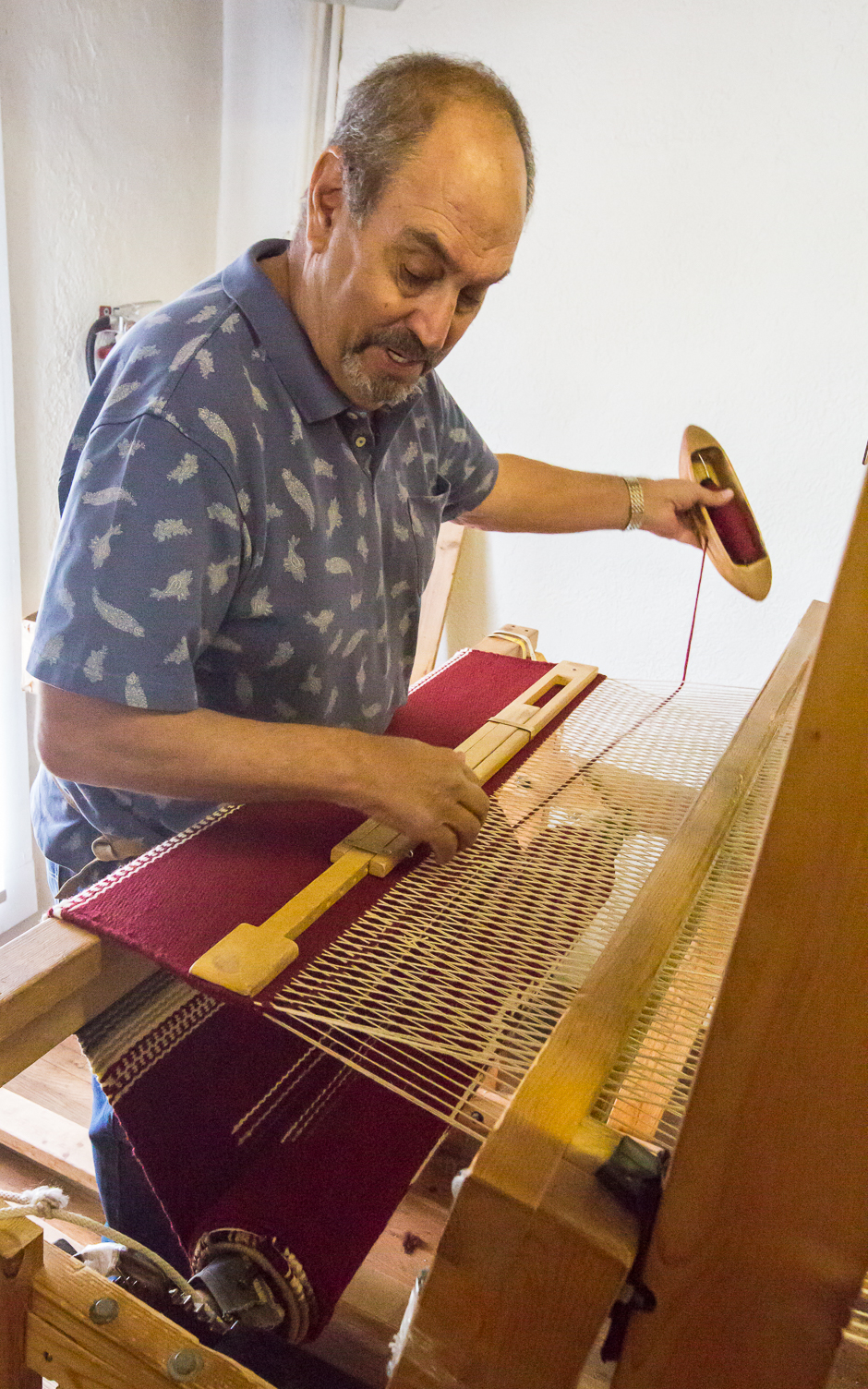 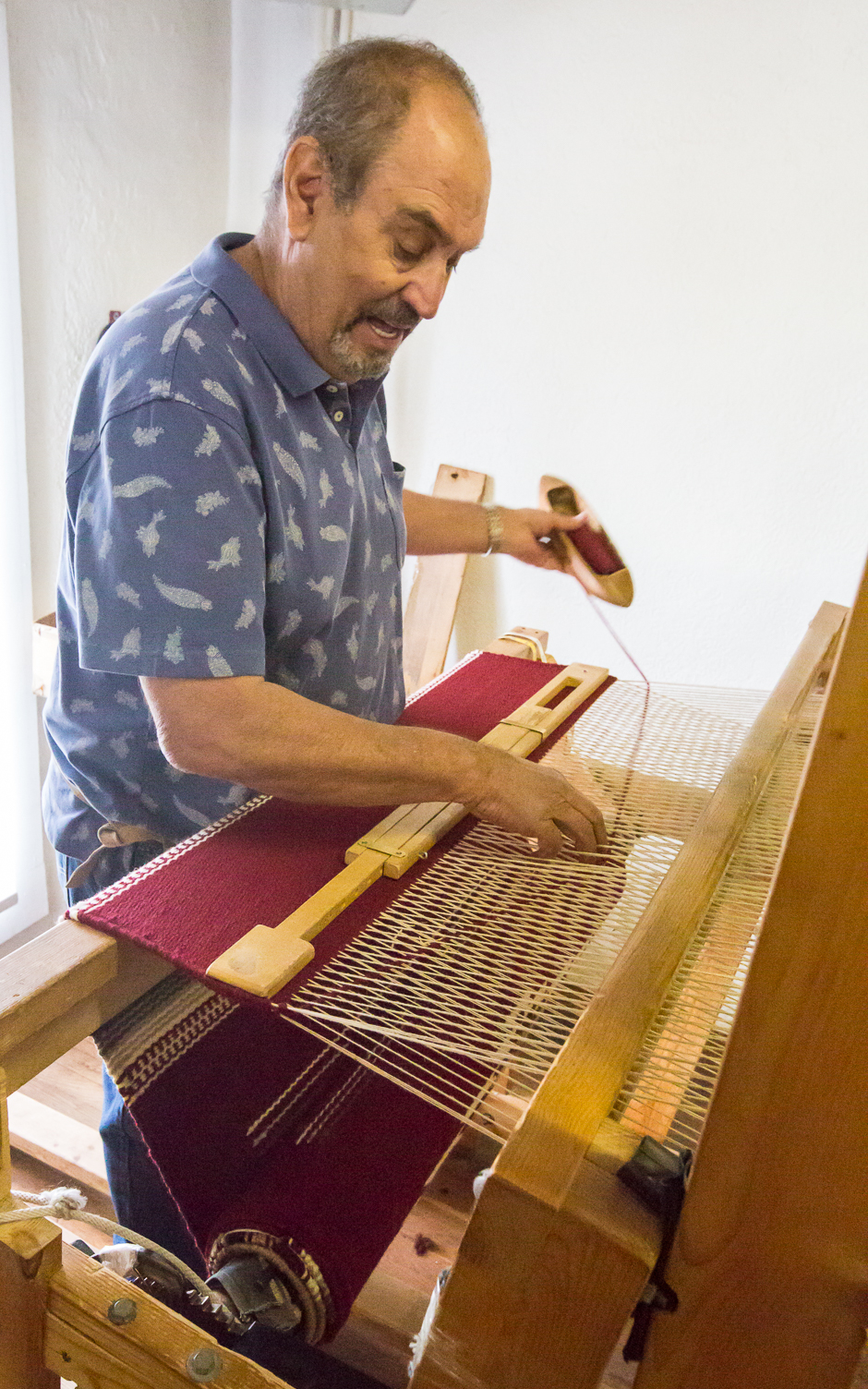 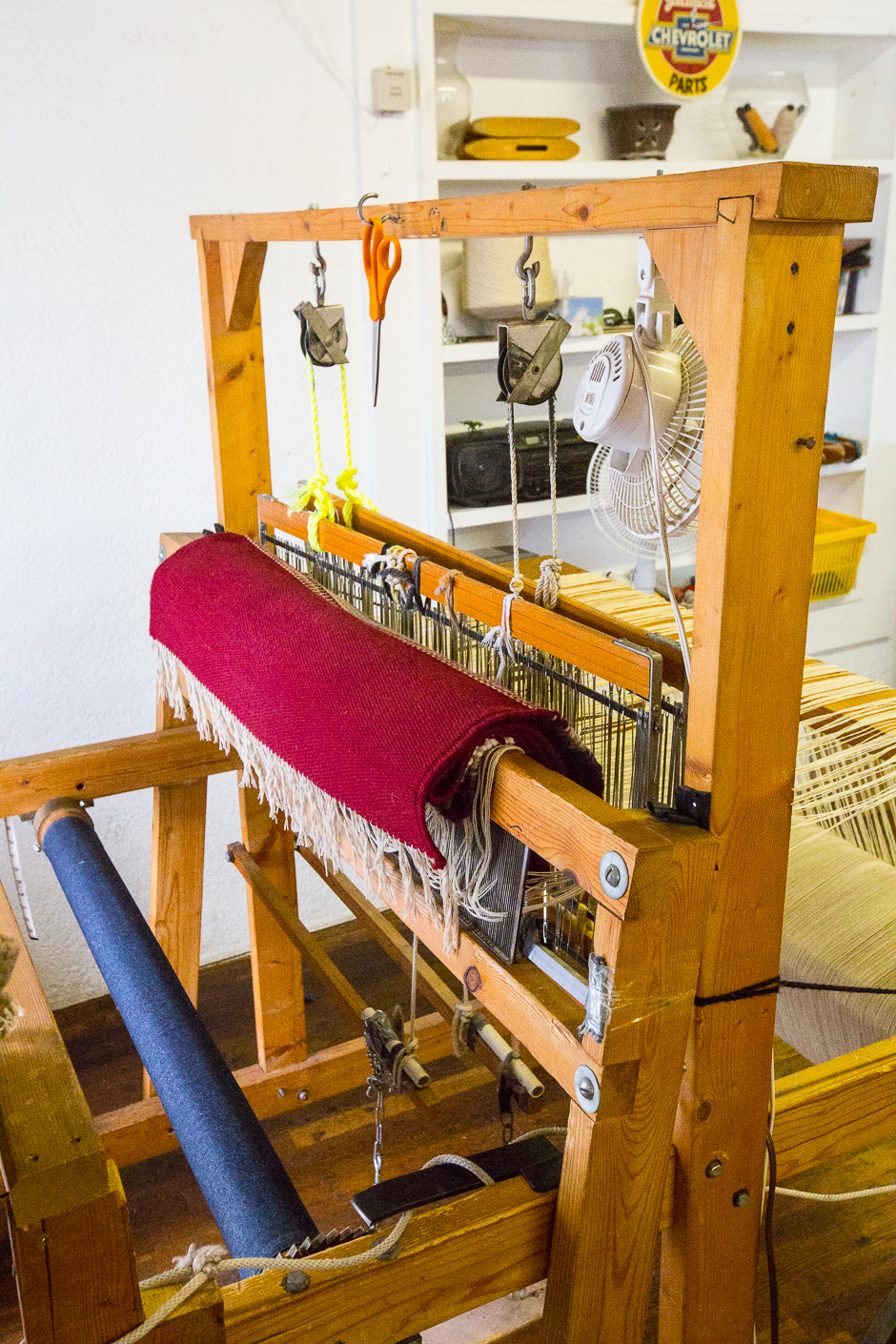 In the mid-1980’s, Andrew and his wife Evita opened Galeria Ortega in the old home of Jose Ramon. They wanted to feature the other arts and crafts of the people of New Mexico. At Galeria Ortega you will find the same respect for traditions of New Mexico with their fine selections of gifts, woodcarvings art, music, pottery, Kachinas, books, cards, T-shirts, chile and native food products and even a cup of coffee and a “bizcochito” the New Mexico state cookie. Galeria Ortega is a somewhat modern version of Nicacio’s general store, complete with Andrew’s looms and the weavings of Andrew, his father David and Andrew’s children Katherine and Paul the eighth generation of Ortega weavers. Visit Galeria Ortega at www.galeriaortega.com. 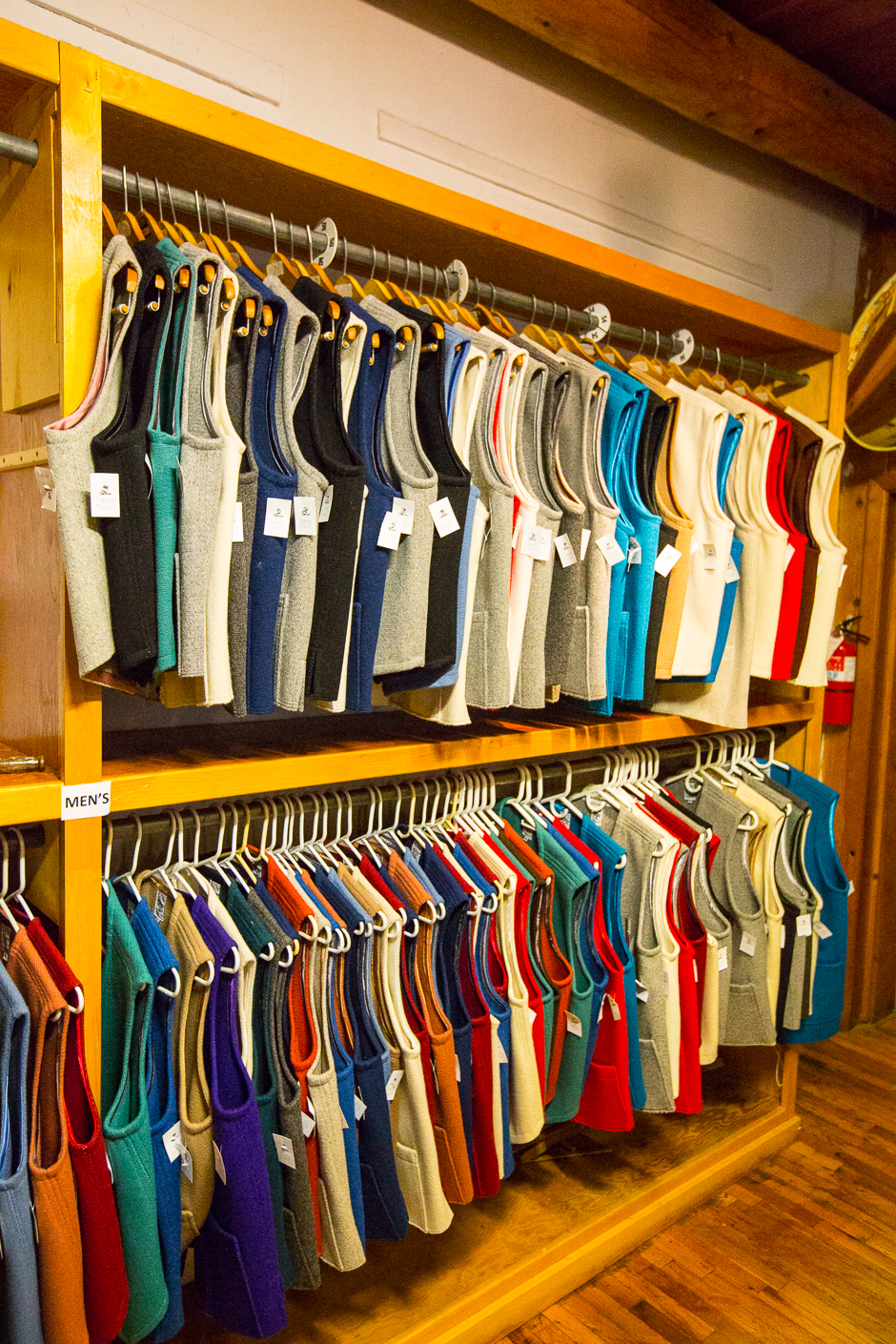 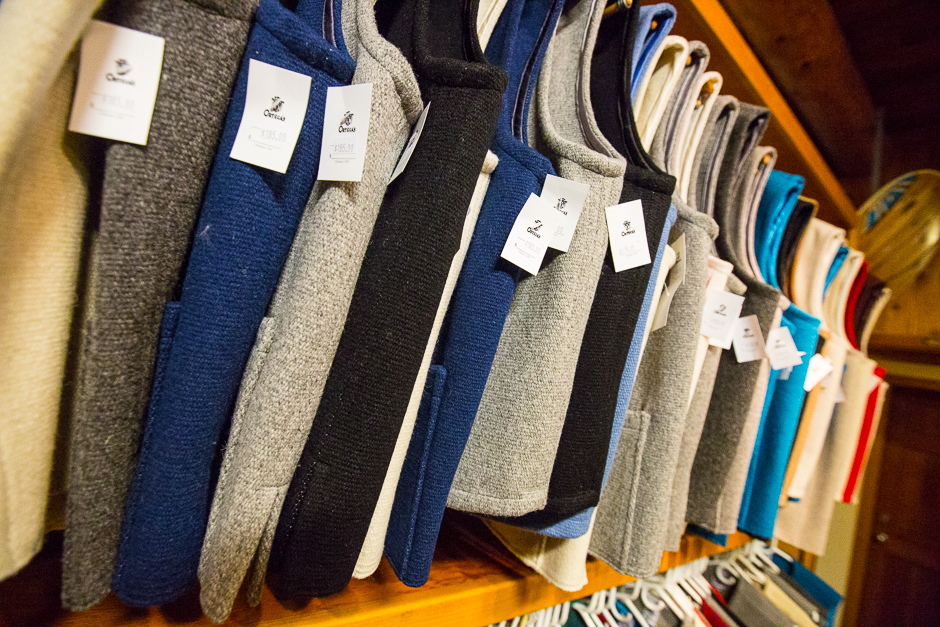 Since David’s retirement, Robert has taken over the reins of Ortega’s Weaving Shop. In Nicacio’s old loom room at the shop you can still see weavers ply their ancient craft. The showroom features beautiful Indian jewelry and pottery from nearby pueblos, along side displays of world-renowned Ortega blankets, coats, rugs, vests, purses and cushions, all hand-woven in fine wool in the “tradition of Gabriel Ortega.” 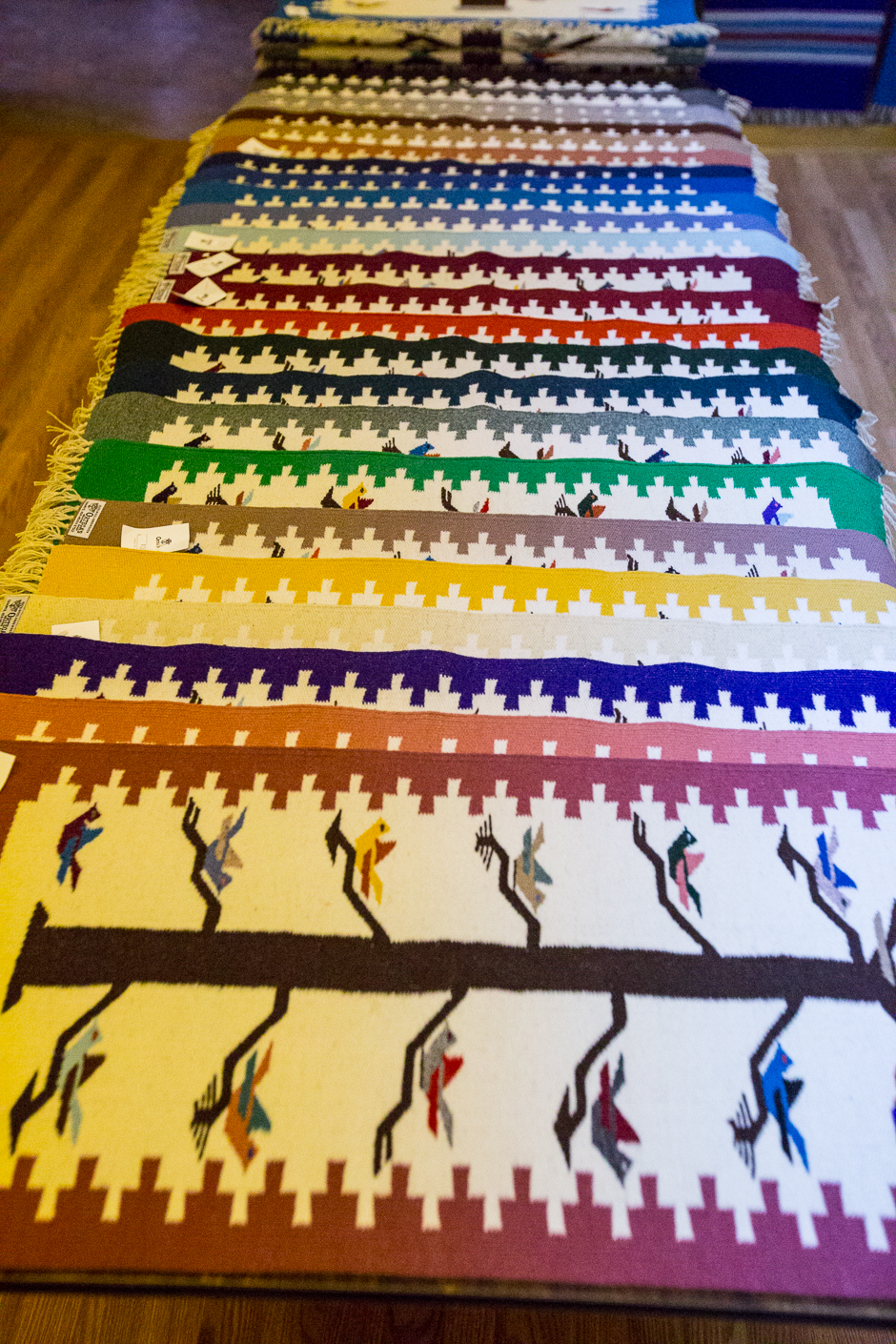 A thank you to Alan Ortega for his time, talent and welcoming & informative graciousness.

This is a big country with kind and generous people everywhere.