Lake Fausse Pointe State Park well on the edge of the Atchafalaya Basin, the far reaches of Ibieria & St Martin Parishes in Acadiana, the Cajun country of Louisiana: we serendipitously stumble upon le Boucherie. 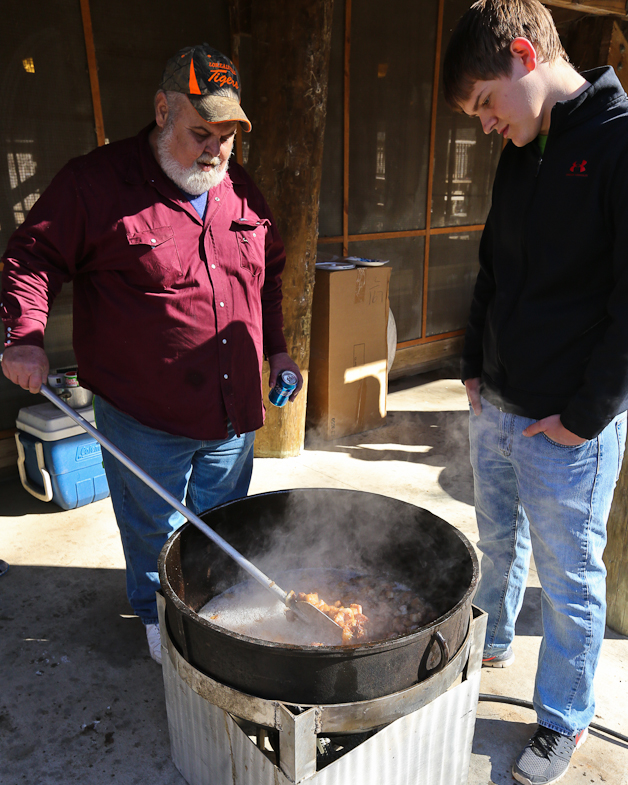 Rendering the Lard & Cooking Up the Cracklin’s

The French or Cajun word ‘boucherie’ apparently can mean many things: butcher or bucher shop in the literal French, any number of restaurants in NOLA and through out Acadiana, and a traditional communal butchering of the pig in rural French Louisiana, Acadiana or Cajun country. 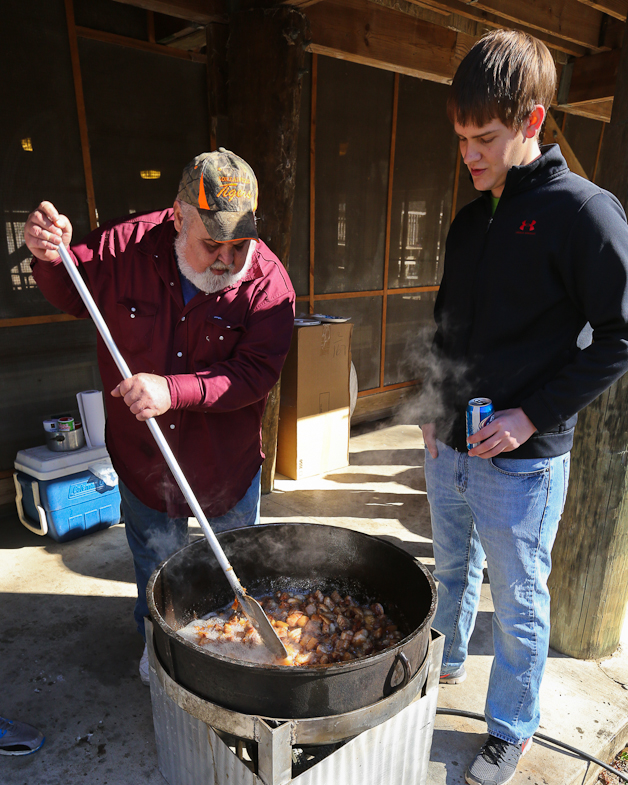 Rendering the Lard & Cooking Up the Cracklins

“Le boucherie is a tradition that has been maintained by the French-speaking Cajuns of the state. Lack of refrigeration meant fresh meat had to be eaten quickly before it spoiled. Neighbors shared in the labors of the boucherie: the boiling of water, the killing and cleaning of the hog, preparation of le grese (lard) and les gratons (cracklings). At the end of the boucherie, those who participated took home shares of boudin (spicy sausage made from pork and rice), and various cuts of the slaughtered animal. Once fall and winter events, boucheries now make up a colorful and delicious part of many Louisiana festivals held throughout the year.” 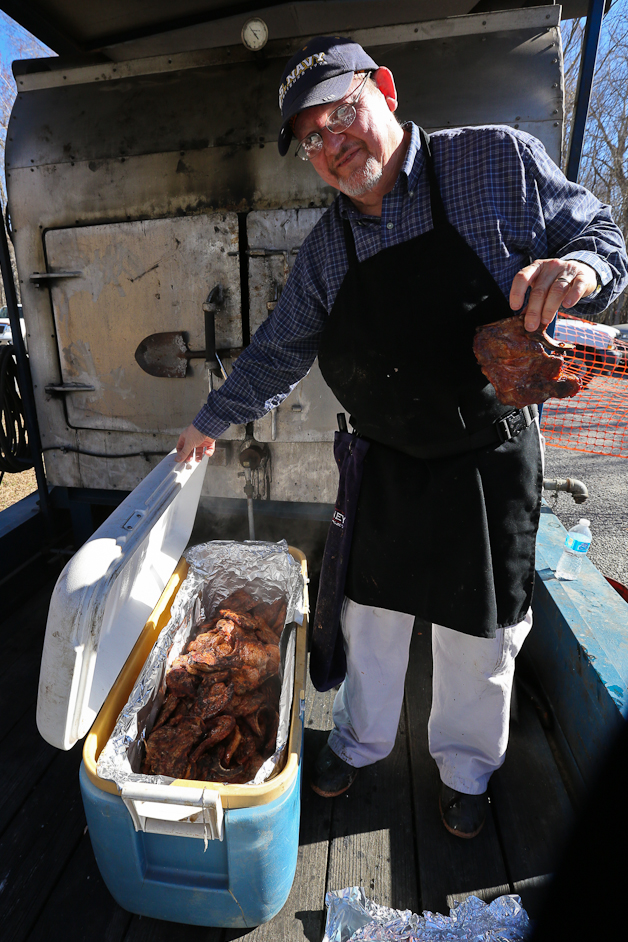 Bounty of the Pork

“When southern Louisiana was still new, the tradition of a Boucherie must have been as ritual to the first Cajun peoples as Mardi Gras and Jazz fest are … now.

Communities would gather at the beginning of the more difficult times of year to help one another complete their seasonal stores born out of the feast made possible by the whole of the people gathered. Each family that took part in a Boucherie would take home a portion of the hogs slaughtered during the celebration, and every community that held one did so in turn; ensuring that the rotation of the pigs that made up the celebration could last through the winter.

Today, as in the past, Boucheires are both preformed as traditional intimate family affairs, as well as being the basis for huge festivals and celebrations throughout southern Louisiana.” 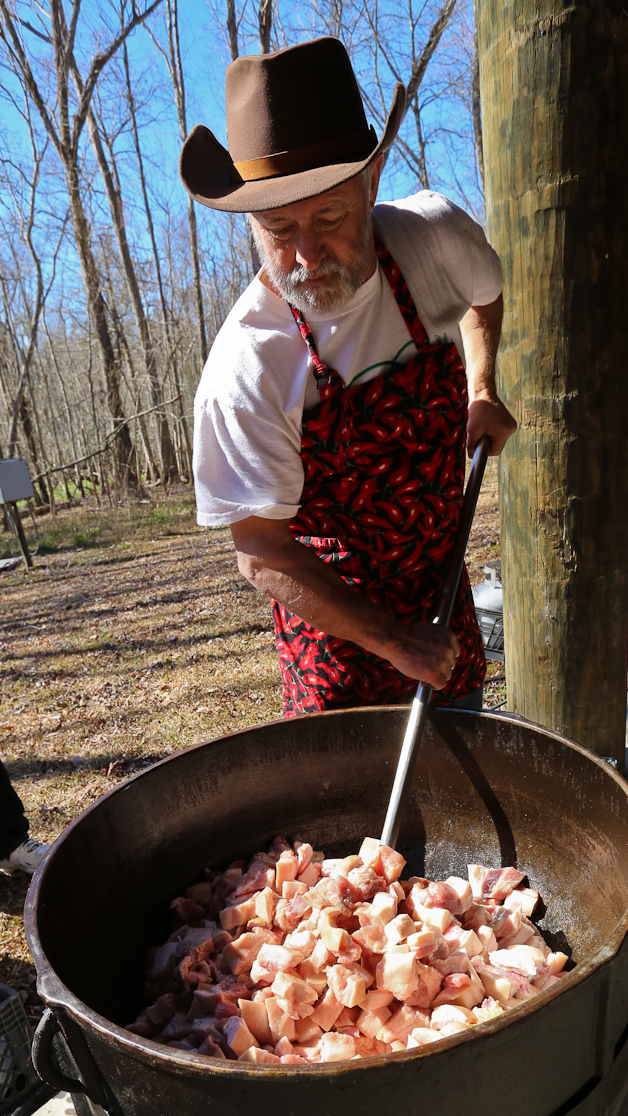 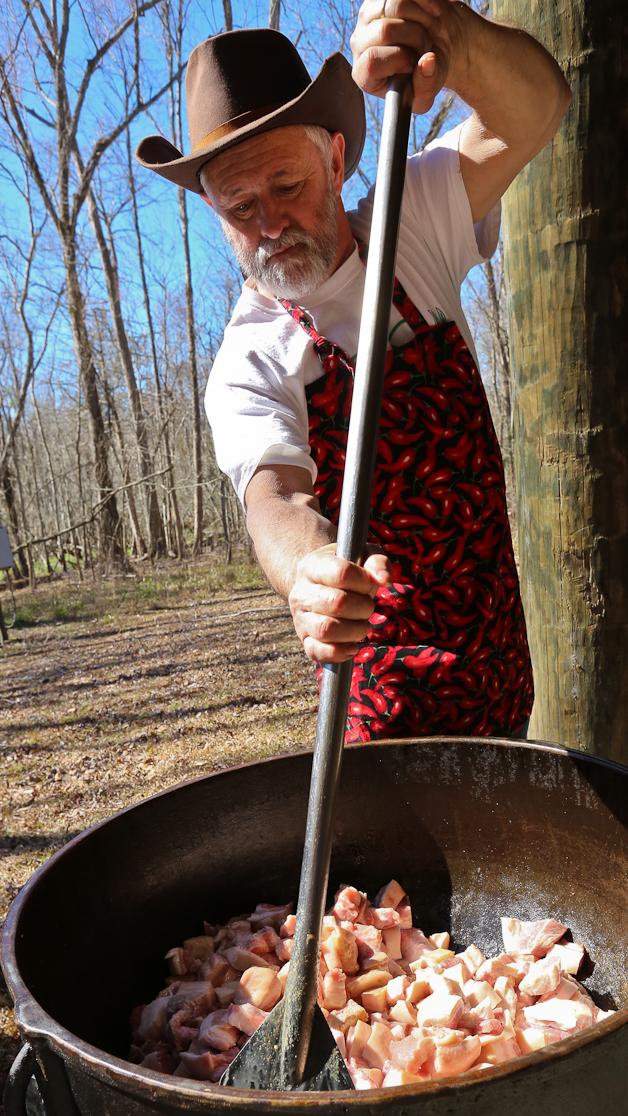 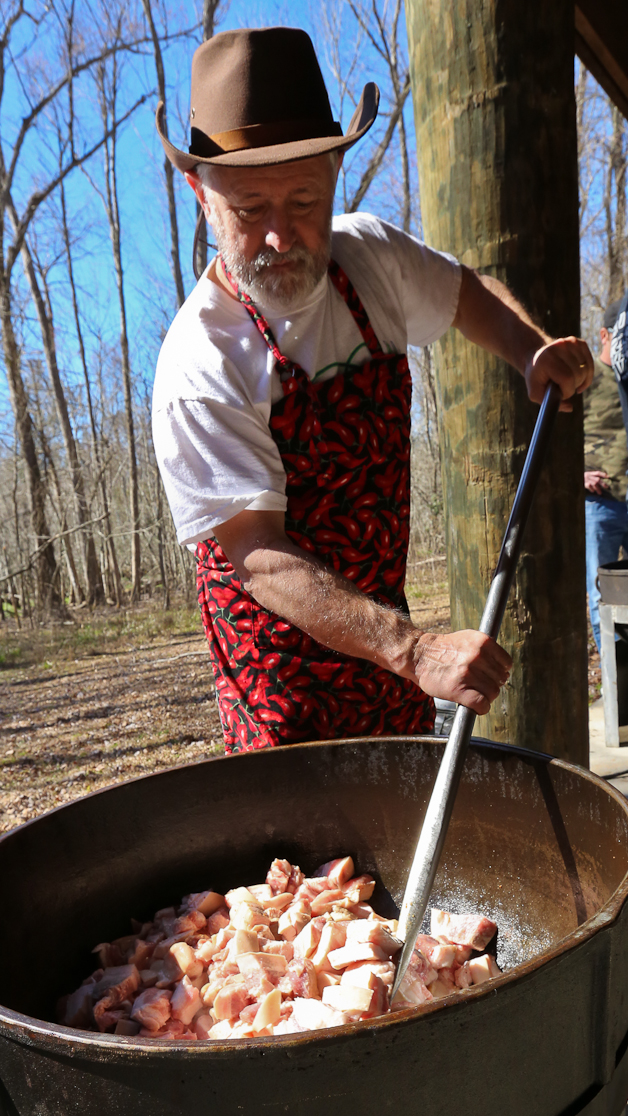 “Cajun cuisine has two distinct heritages–Creole, with its influences of classical and regional European cuisine, and the homey, country-style Cajun cuisine of Acadiana (French Louisiana), with its one pot meals, made with fresh, local ingredients and pungent with the flavor of seafood and game.

As diverse as those who settled there, Cajun cuisine is a creative adaptation of a variety of European dishes using ingredients indigenous to Louisiana. The well-known Cajun dish Gumbo, has its origin in the French Bouillabaisse, a soup found in the Marseilles region. Jambalaya, the famous Cajun rice dish is descended from Spanish paella is made using the abundant seafood in the region. The Germans brought with them charcuterie and andouille, smoked sausage, boudin, chaudin, tasso and chaurice and their fine sausage making talents. The Italians, famous for their culinary talents, were heavy influencers of the Creole style and settlers from Haiti and the West Indies brought with them exotic vegetables and cooking methods.” 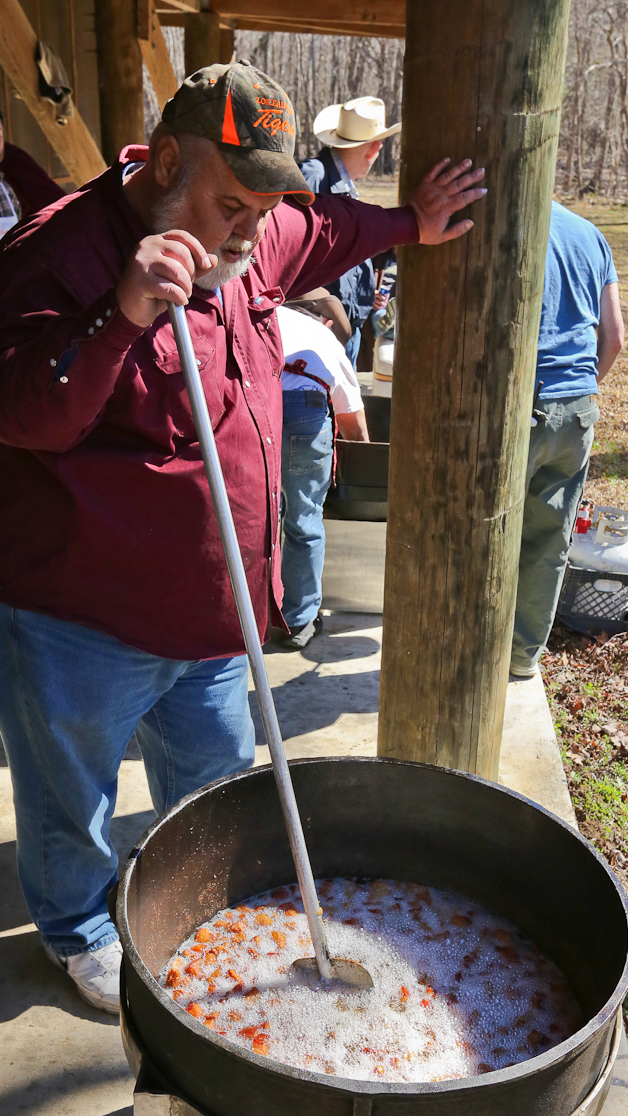 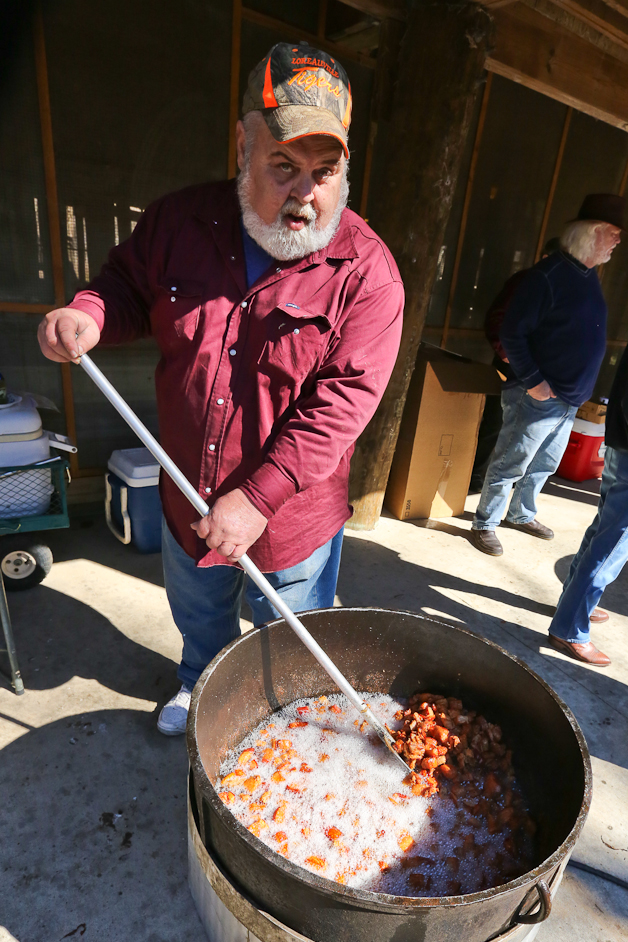 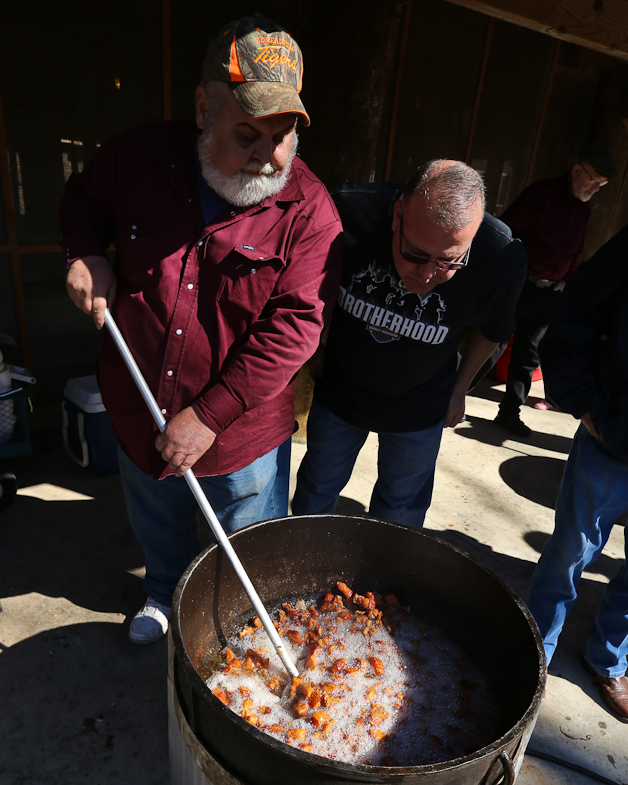 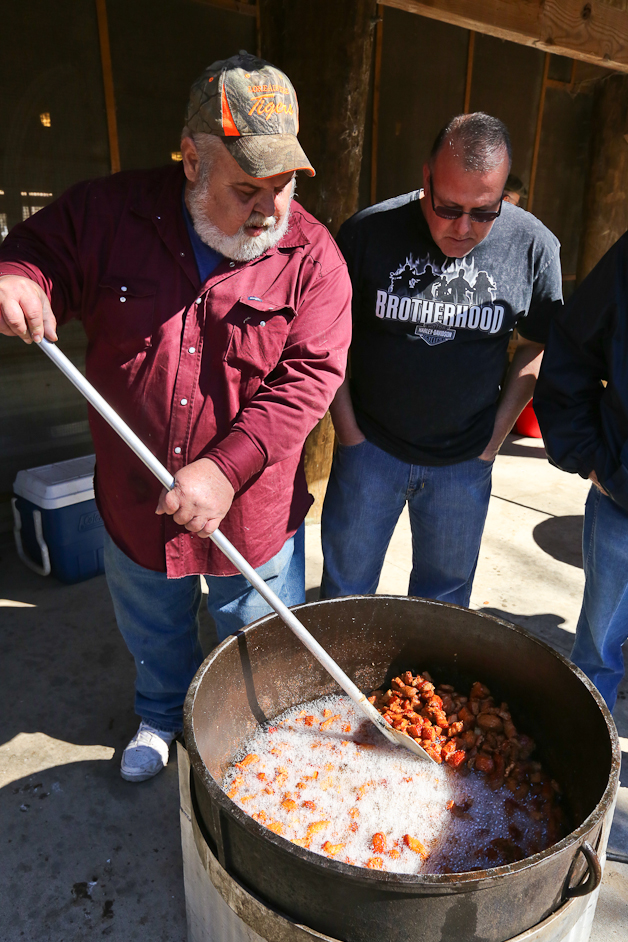 The history specific to the Lake Fausse Point le Boucherie involves a number of Cajun men proud of their heritage. Decades back now a rural veterinarian was ‘paid’ for his services by a Cajun family with the ‘commodity exchange’ of a live hog. The veterinarian and a few adventurous friends decided to butcher the hog in the traditional fashion of ‘le boucherie’. Though new to the old ways of ‘le boucherie’ they found their way: Many years and many peoples later one hog has become six and a half dozen friends has become hundreds.

The Lake Fausse Pointe le Boucherie is a touch updated but still a communal gathering of peoples to prepare the pork, eat together from the bounty, visit, sing and dance. This year’s chilly winter took a break and  sunny blue skies and warm temps graced the day. A more friendly and welcoming group of people could not be found.

Bryan’s Swamp ~ The Atchafalaya According to Bryan Champagne