The fresh and earthy aroma of tobacco caught my nose from down the street. A non-descript sign up high among the many and garish  announced:

The front end of the deep shop was lit up by the light streaming in the open double-wide doors. Chairs and tables were arranged for sitting and socializing. At the hour we happened by only one other person was seated.

The center portion of the shop contained old well worn wooden work stations. Seated behind the work stations on both sides of the shop was a mixed group of folks working and handling the tobacco, all at different stages of becoming cigars. The group working today was of mixed gender and age, youngish to middle aged and up, all outfitted in working class attire. Young well-scrubbed and well-presented men hung around near and behind those handling the tobacco, giving the appearance of being in charge. There seemed to be a not-to-be-crossed line between the ‘rollers’ and the ‘handlers’. The groups went about their tasks and did not speak. It was not until we attempted to talk to the cigar rollers that one of the youngsters stepped in to intercede, offering that none of the rollers spoke English. It would have been nice to allow us to try. I tipped Leonardo, my main focus. He seemed to understand the language of cash well enough.

The back portion of the shop was the sales area, still having the feeling of an old wooden shop but different from the rest: lights were brighter, a glass fronted humidor room for aging of the finished cigars showed off and the ubiquitous cash register was front and center. 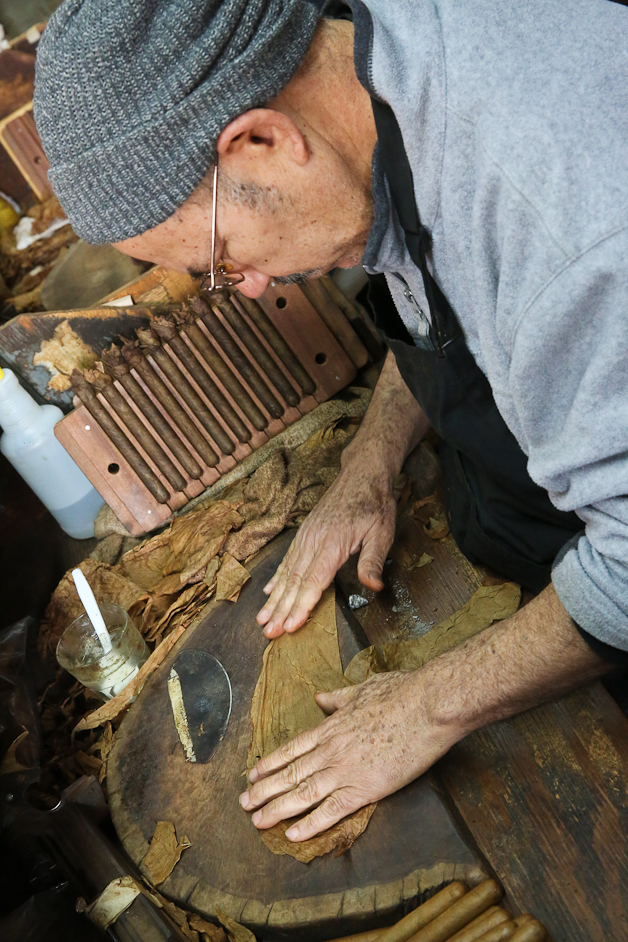 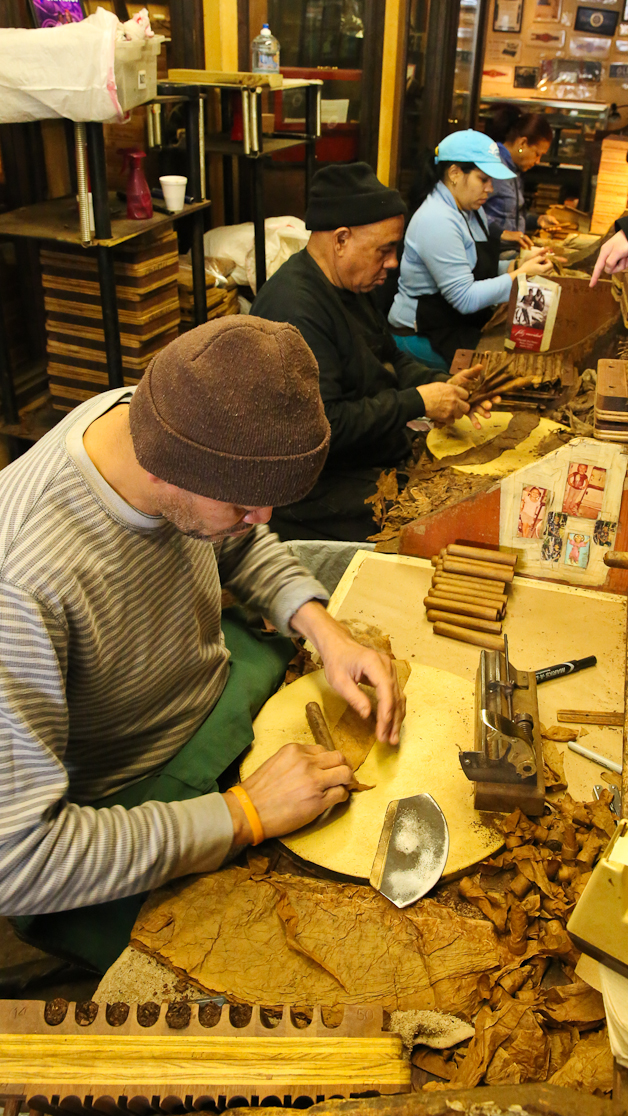 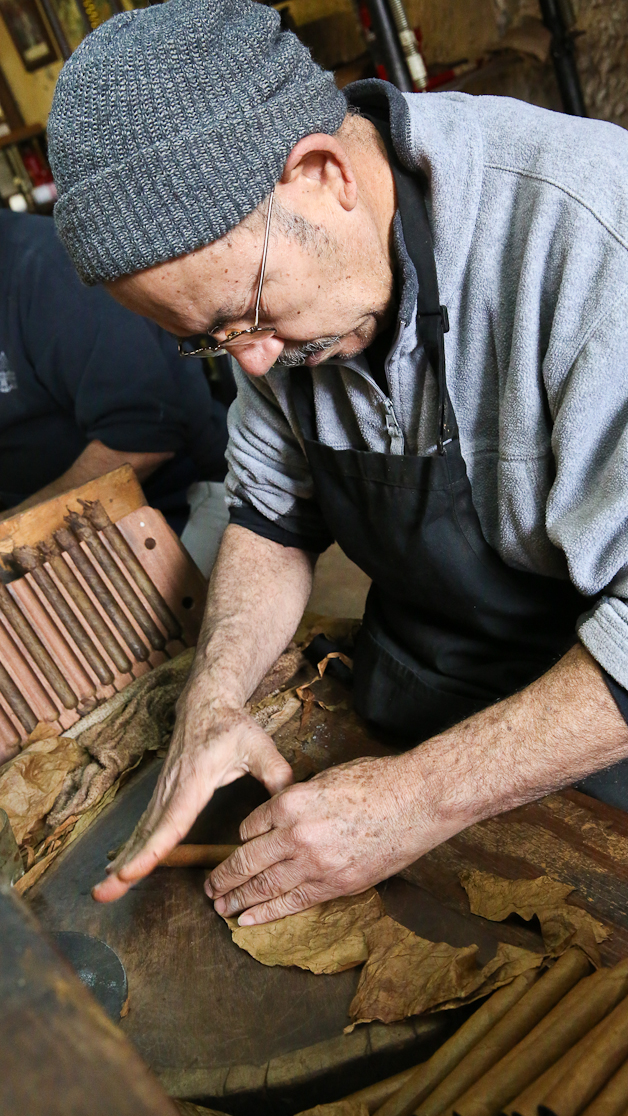 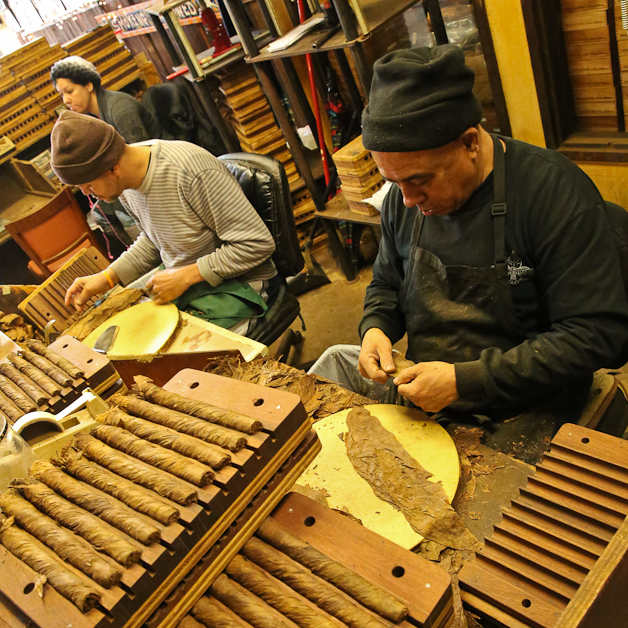 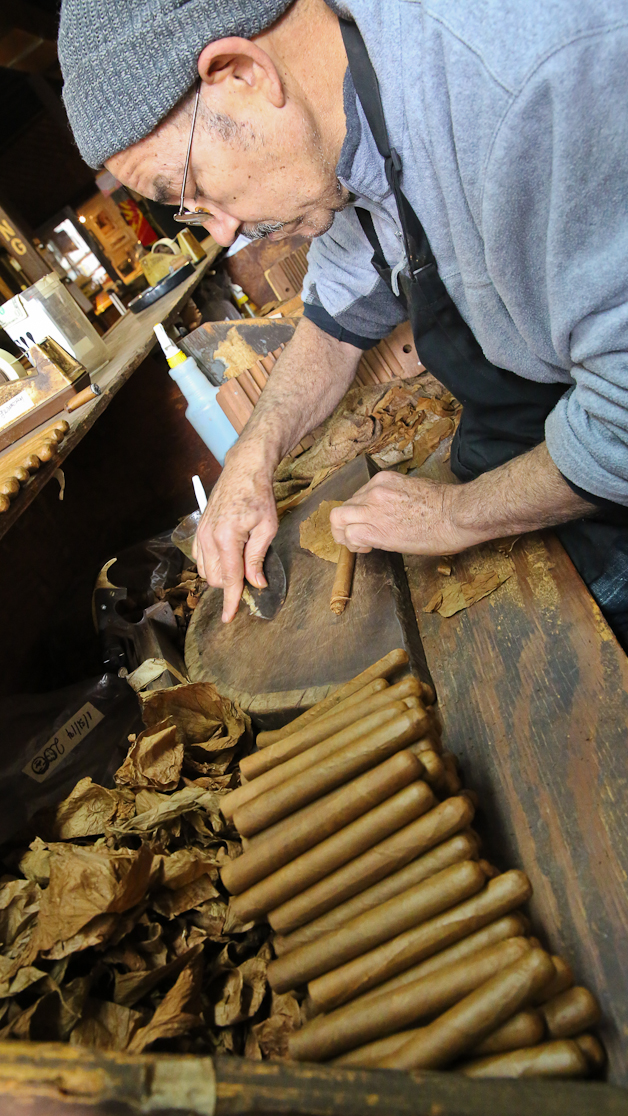 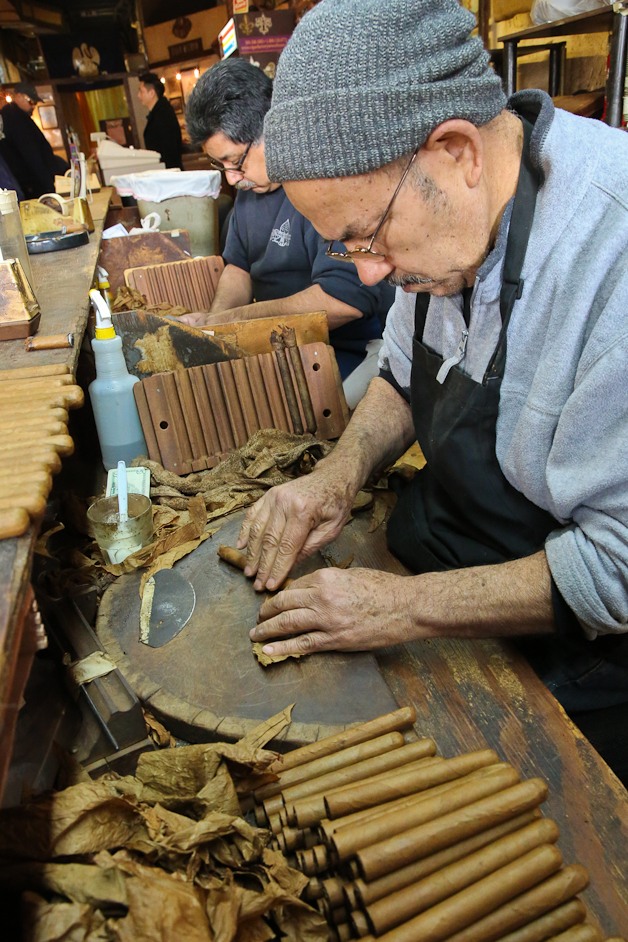 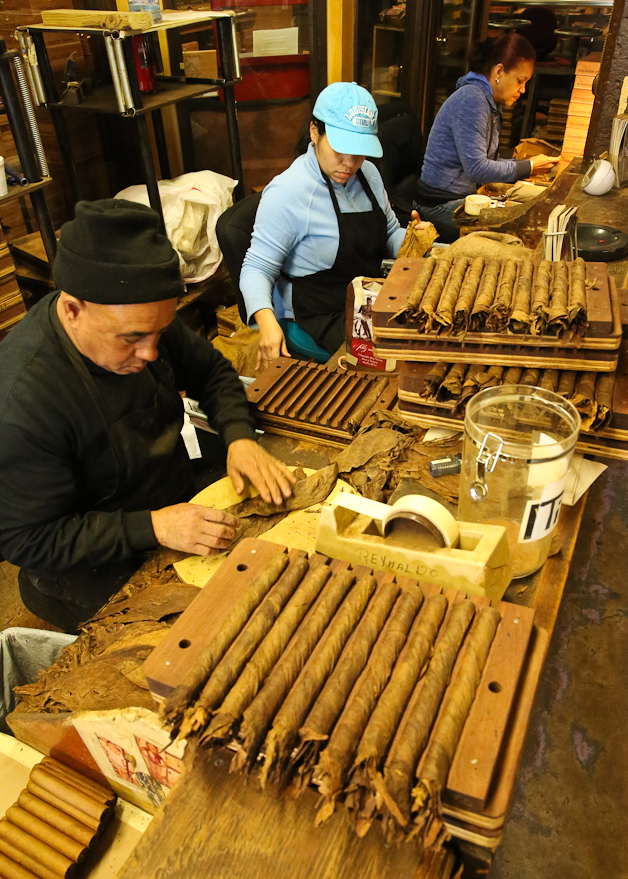 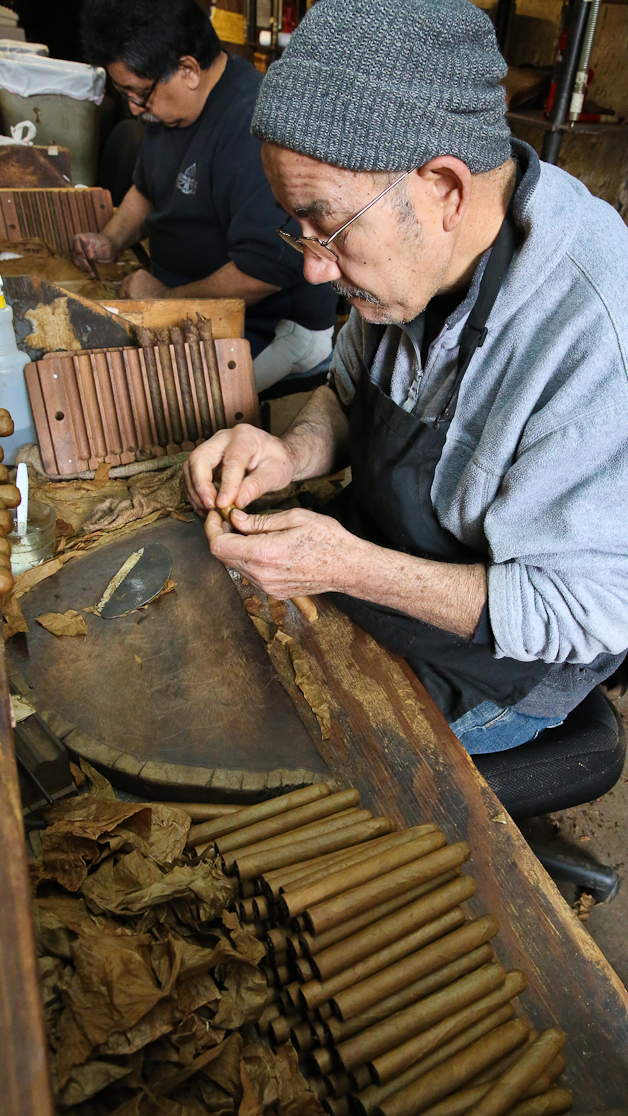 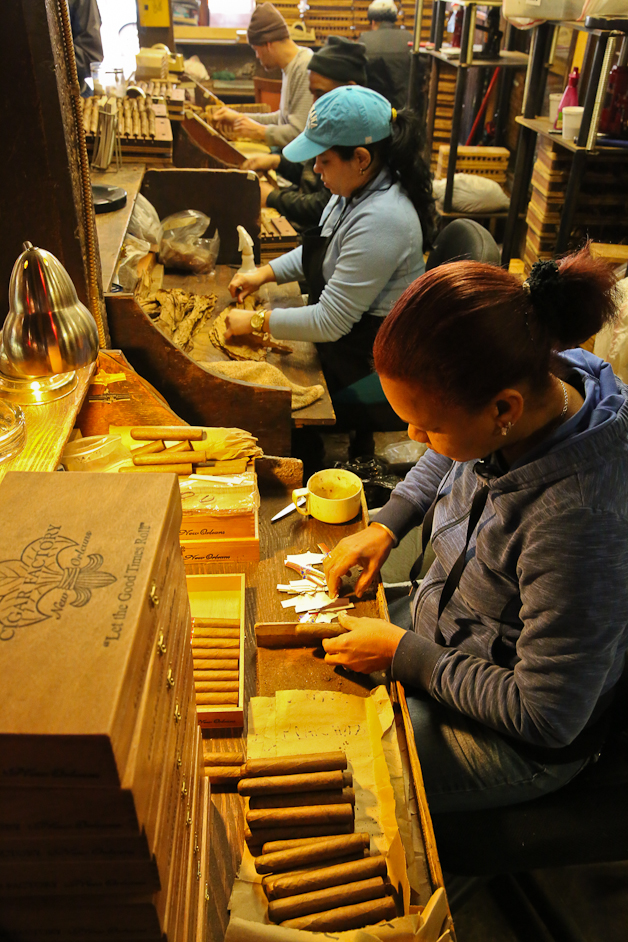 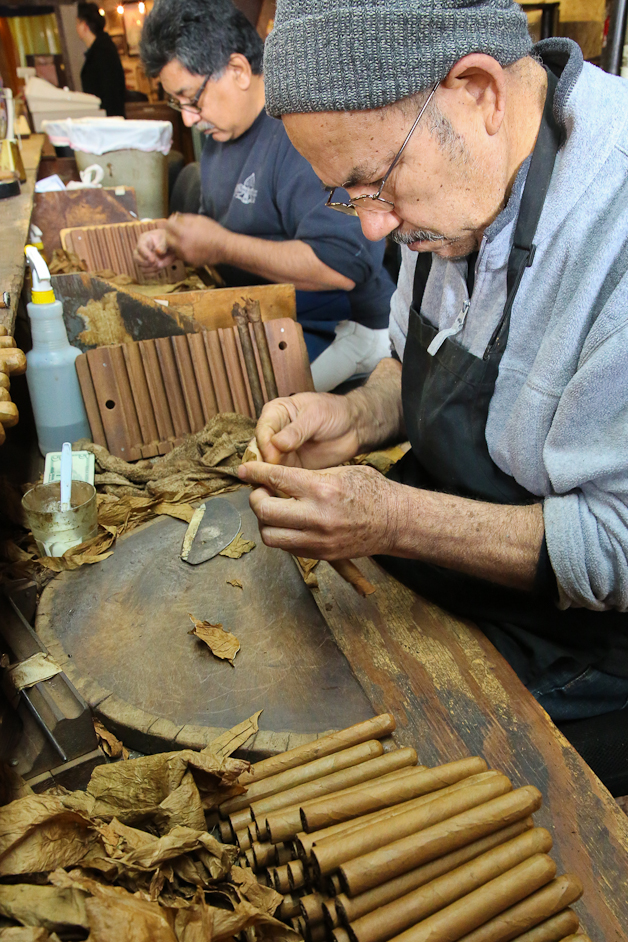 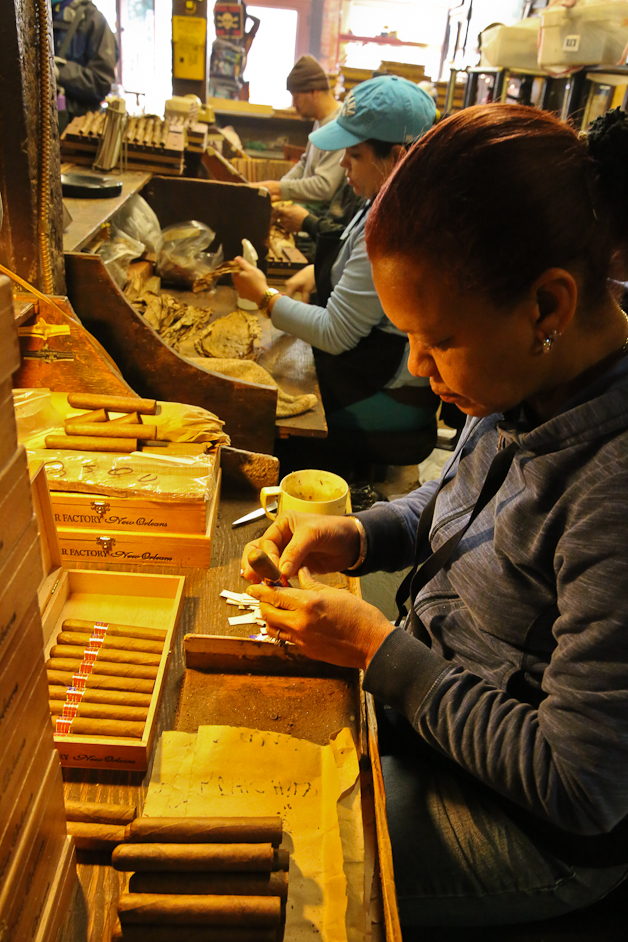 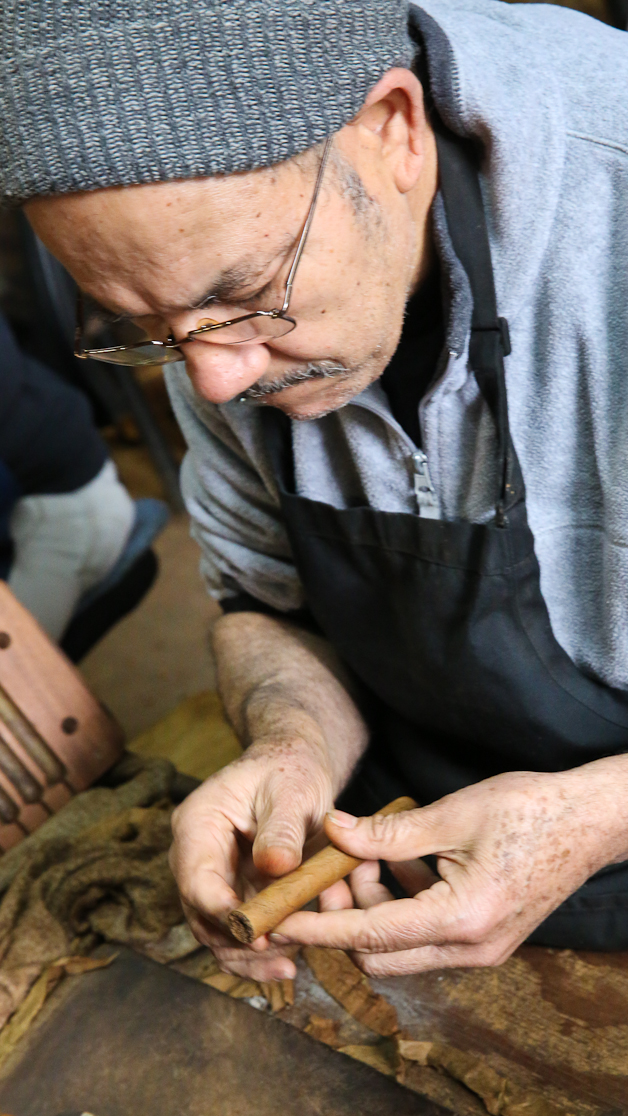 All the rolling and wrapping, inspecting and labeling stages of  fine aged tobacco becoming a fine freshly rolled aged cigar were happening around us. Tobaccos were combined, mixed and shaped then placed in a specific-sized two-sided wooden mold. The molds were stacked, pressed and aged. Tobacco leaf was selected, sorted and smoothed for wrappers. The cigar core was wrapped in fine select tobacco leaf. Angled on the bias, rolled, coddled, encouraged, cut and set with special attention being given to the tip through which one inhaled. The cigars found their way back into molds after being rolled in the tobacco leaf wrapper. Again: more aging. The final stop: a visual and tactile inspection, application of the cigar factory label cigar ring and placement in brass-clasped-and-hinged embossed wooden boxes.