at the intersection of U.S. Highway 90A and State Highway 95 in western Lavaca County Texas

the town that beer built and sustains

… and do try the cream ale and the cold brewed coffee ale, my favorites among the family of Shiner Beers.

“In 1885 a post office called Half Moon was opened at a trading post near the present site of Shiner. When the San Antonio and Aransas Pass Railway came to the area in 1887 it bypassed Half Moon and built through land owned by Henry B. Shiner. Shiner donated 250 acres for a right-of-way and depot, and a town soon grew around the new transportation facilities. At first the community was called New Half Moon, but in 1888 its name was changed to Shiner. Shiner was incorporated in 1890, and L. P. Amsler was elected the first mayor. Czech and German immigrants soon became the dominant ethnic groups, and Shiner developed a cohesive Czech community through social organizations such as the National Sokol Society and the Slavonic Benevolent Order of the State of Texas. “ 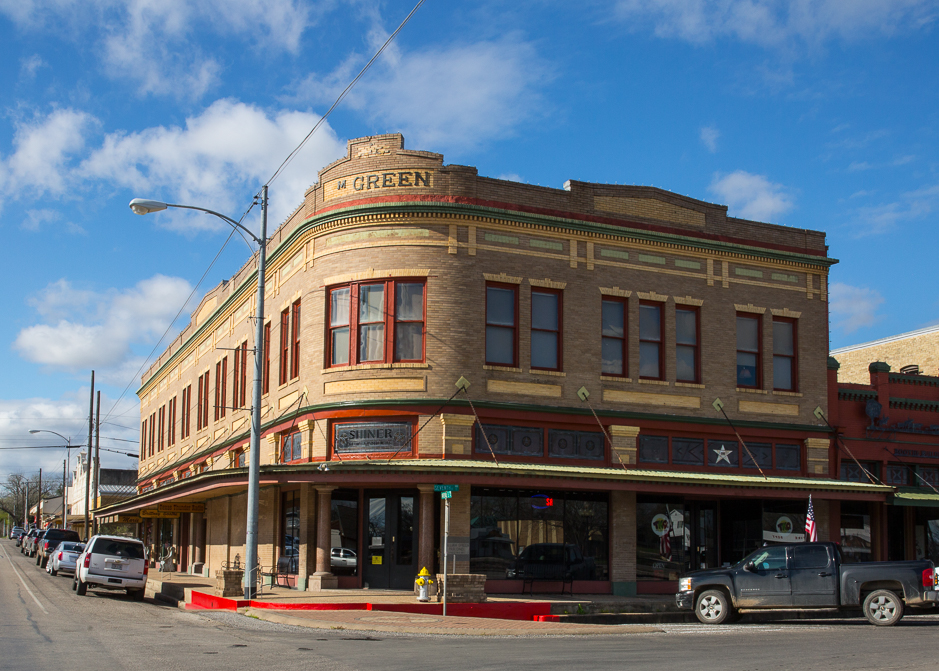 The ‘Grand Lady’ of Shiner ~ The Shiner Opera House

Smart Car and all. 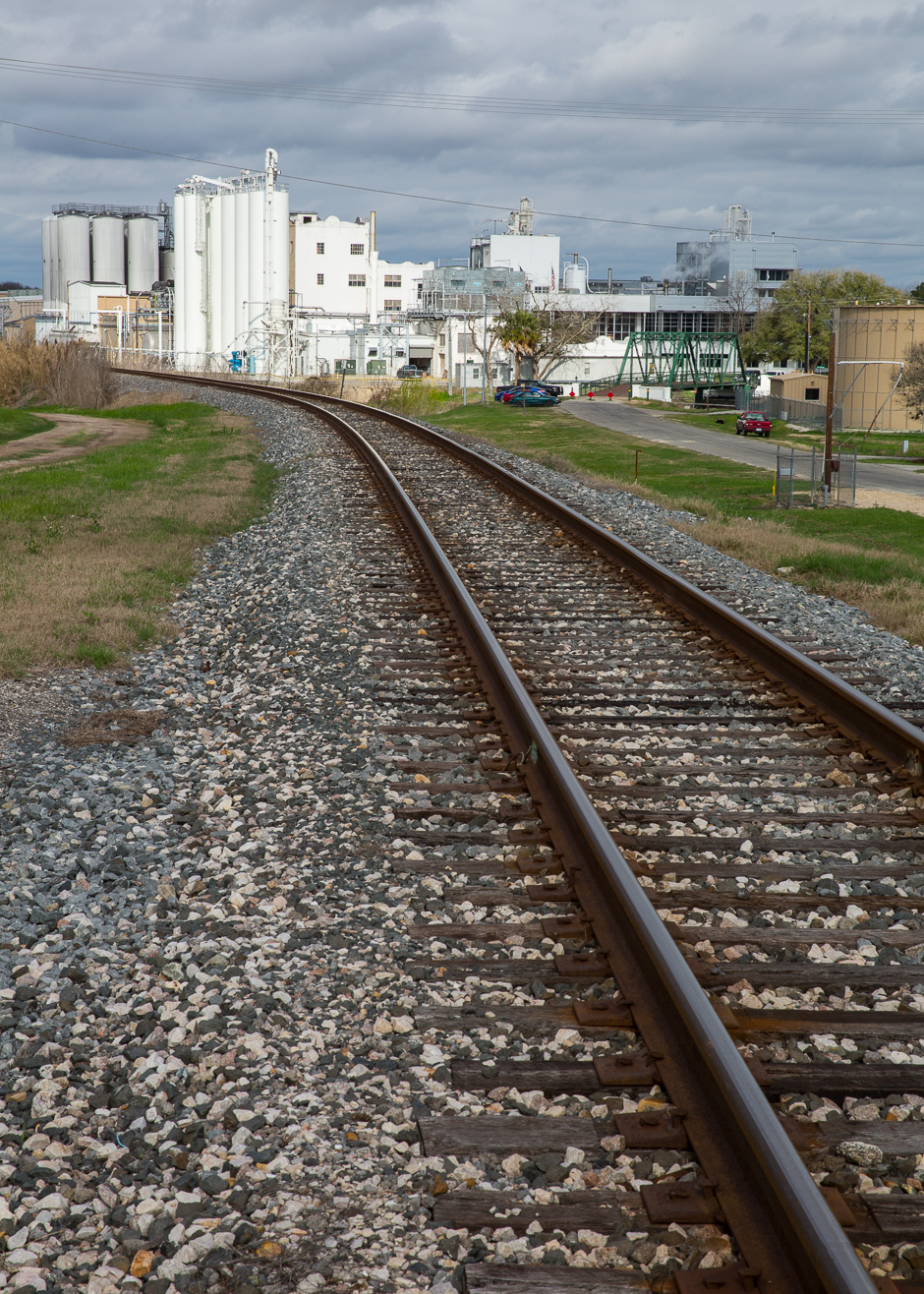 Two reasons for Shiner’s location and success: the railroad, originally the San Antonio & Aransas Pass (SAAP) and the Spoetzel Brewery.

The Spoetzel Brewery and their variations of Shiner Beer have made the town ‘a household word’ throughout the state of Texas. 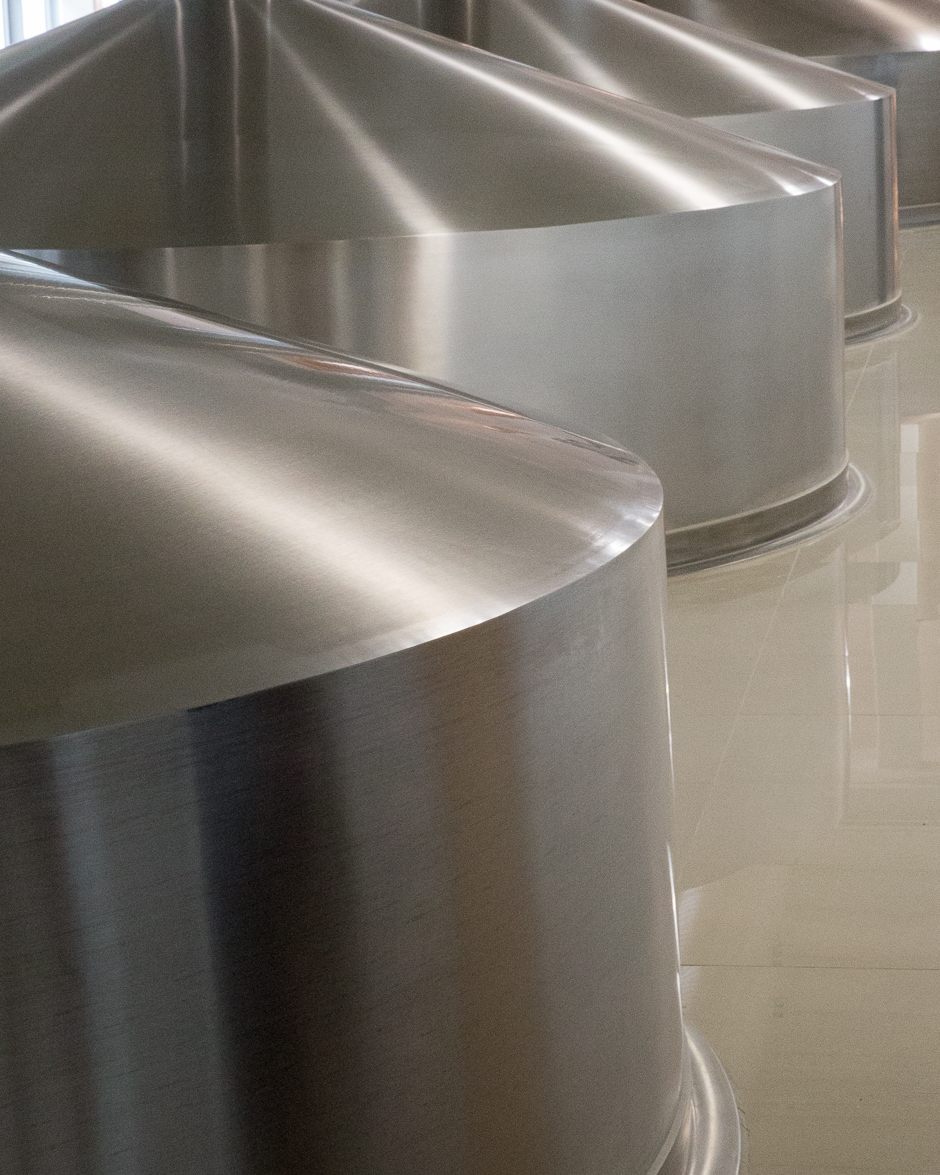 The Spoetzl Brewery started in 1909. It was originally named “The Shiner Brewing Association,” (SBA) and was founded by German and Czech immigrants who had settled around the central Texas town of Shiner. Unable to find the type of beer they had known in their home countries, they decided to brew their own. It is the oldest independent brewery in Texas and one of the oldest independent breweries in the U.S. 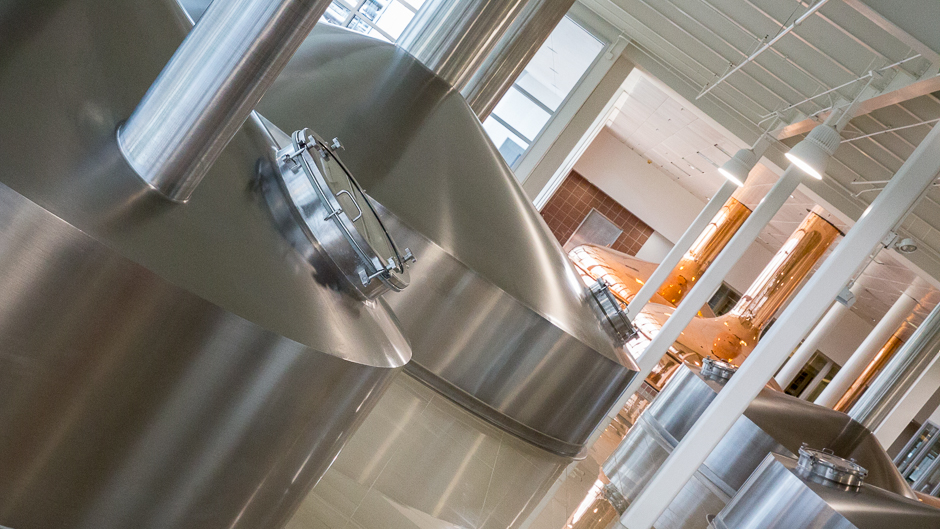 Shiner was originally a “Lenten” beer, only available in the spring. As the brewery gained popularity in the area, the SBA began to look for a trained professional brewmaster. They found one in Bavarian-born Kosmos Spoetzl, a onetime soldier who had trained as a brewmaster in his native Germany. Part of the package that lured Spoetzl to Shiner was potential ownership of the brewery. In 1914, he co-leased it with Oswald Petzold with an option to buy in 1915, which he did, giving the brewery his own name but continuing to call the brews Shiner Beers. Spoetzl had attended brewmaster’s school and apprenticed for three years in Germany, worked for eight years at the Pyramids Brewery in Cairo, Egypt, and then worked in Canada. He had moved to San Antonio in search of a better climate for his health, bringing with him a family recipe for a Bavarian beer made from malted barley and hops. 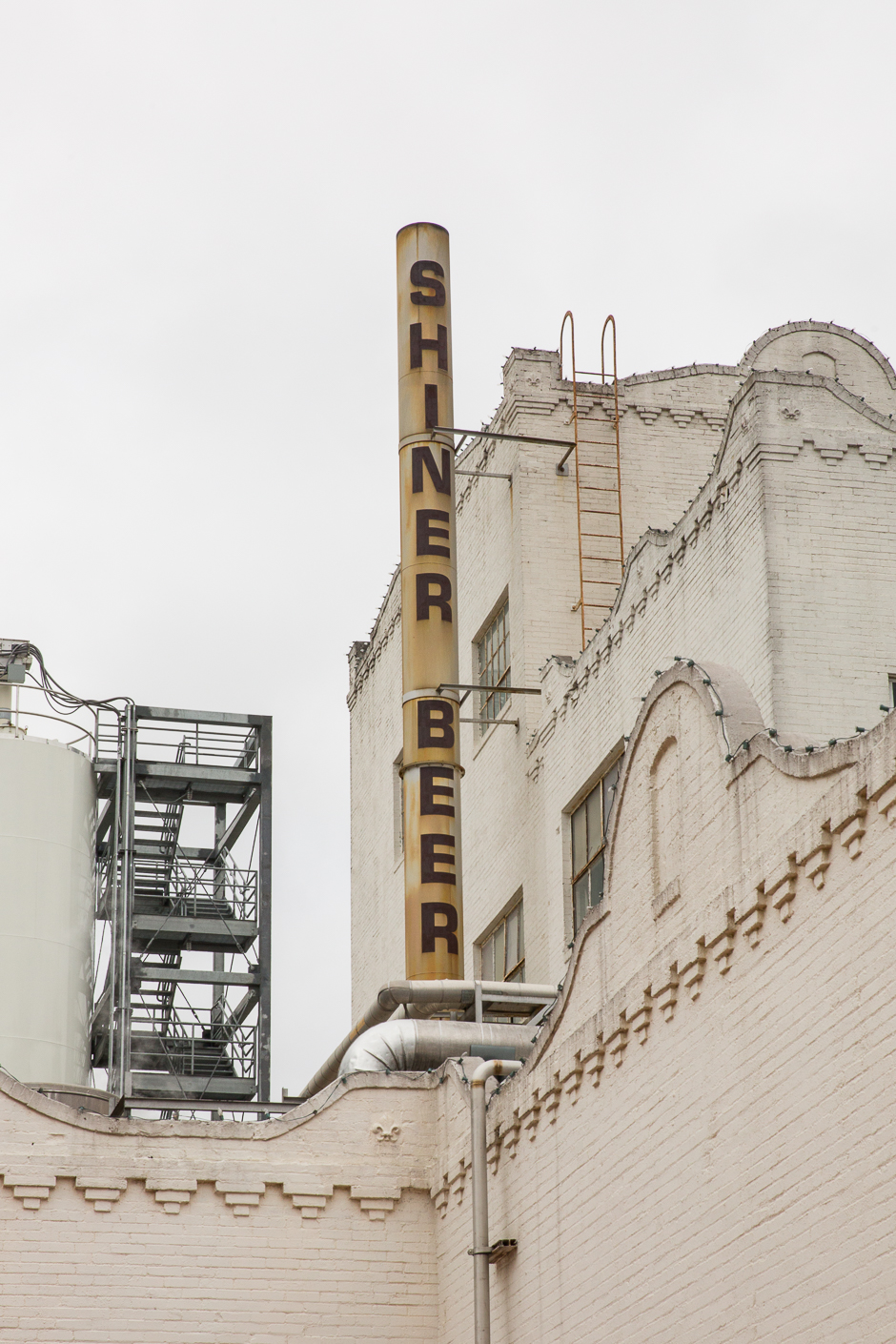 Carlos Alvarez of San Antonio acquired the brewery in 1989 (from the last of the Spoetzel family). As of 2012, it is the fourth-largest craft brewery and the tenth-largest brewery overall in the United States. 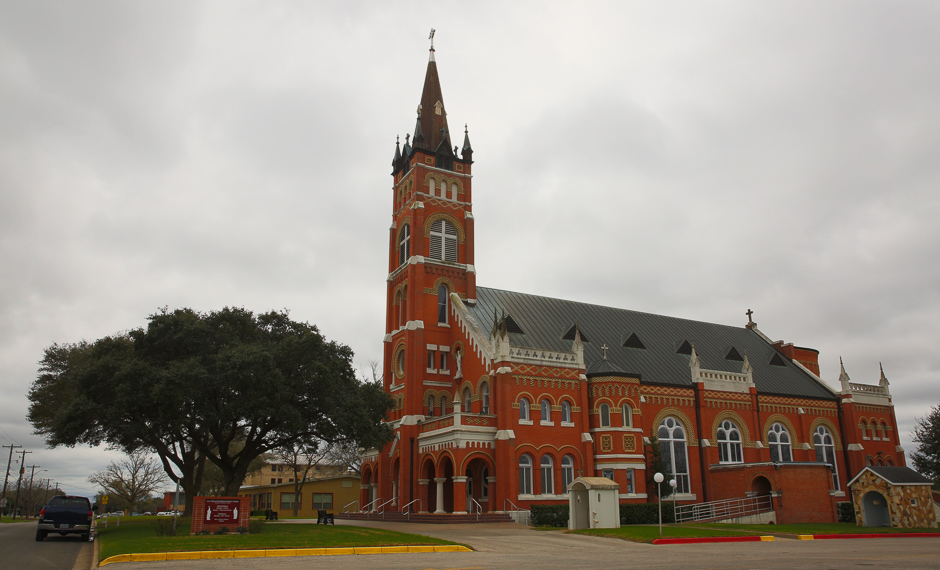 One of Texas’ Painted Churches. 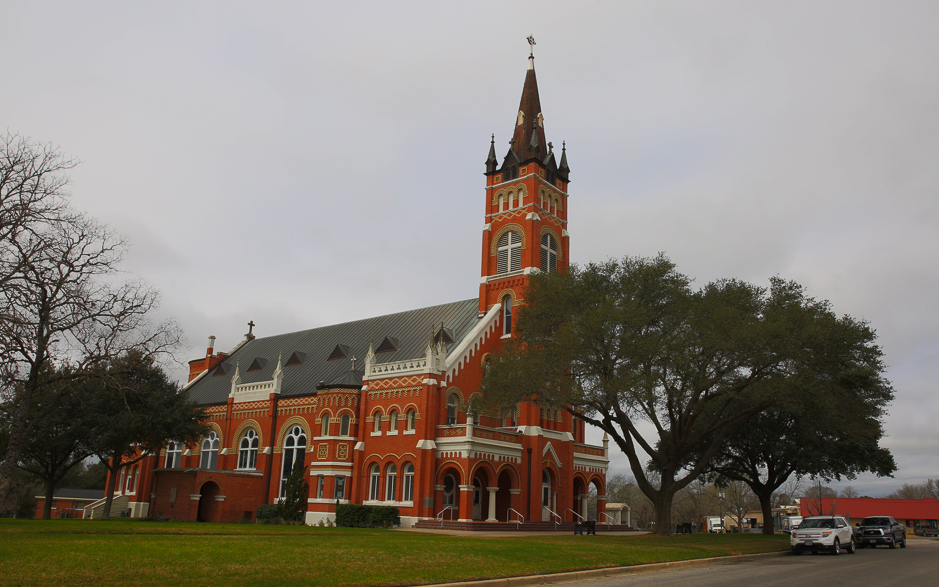 In 1890 two acres of land were bought for construction of a church. The first wood frame church was completed the following year and damaged in a tornado in 1892.

By the early twenties, the congregation had long outgrown the original church and the present church was built near the first.

In 1954 the building underwent a restoration and it is believed the interior was painted shortly thereafter. 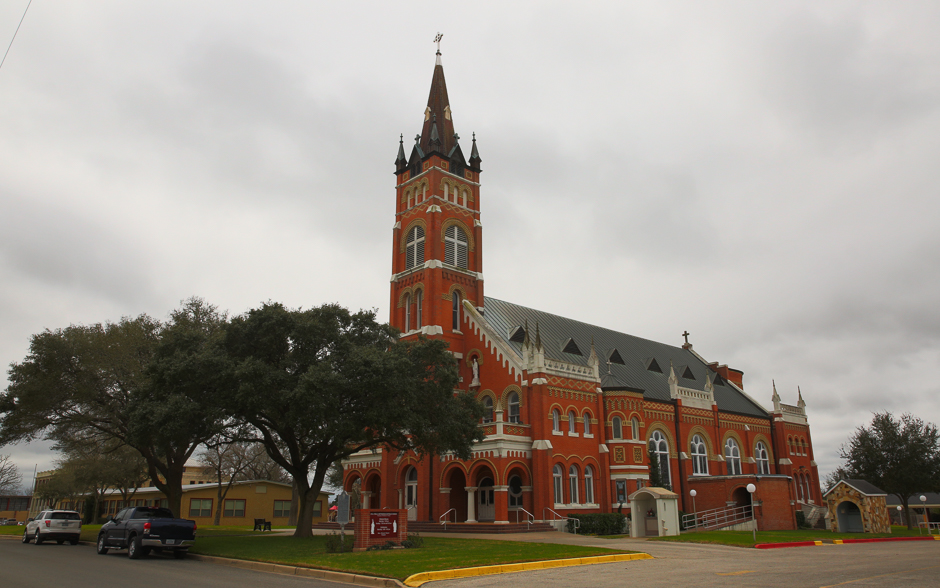